Sandstone, the principal bedrock outcropping in the region, is very resistant to erosion and forms the uplands and steep sides of the valleys. Twisting roads and forest trails pass through these deep ravines and lead to dense stands of beech, hickory, oak, maple and tuliptree. Seasonal displays are offered by flowering dogwood, redbud and spring wildflowers -- with fall presenting a pageant of colorful foliage. These woods are home to white-tailed deer, fox, raccoon, opossum, squirrel, wild turkey and a variety of songbirds. Woodthrush, white-breasted nuthatch, scarlet tanager, pileated woodpecker and the rufous-sided towhee inhabit the forest canopy. These rugged hills and woodlands are truly reminiscent of the wilderness that characterized the Ohio country in the days of early settlers. 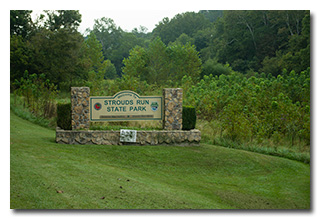 Eric, who is president of ACARA and served as captain for this year's OSPOTA operation, arrived at the Bulldog Picnic Shelter shortly after 1300 UTC to find Paul Schulz, WD8SCV, already there—and to find that ODNR had cut the grass that very morning and the lawn surrounding the picnic shelter was deep in very wet, very fine grass cuttings that stuck to everything and made working with ropes and wires a real chore. Jeff arrived shortly thereafter, as did other ACARA members. While Eric and Paul concentrated on deploying a 80m/40m fan dipole and a 10m-40m trap dipole on a 24' mast, Jeff set up the ACARA's Elecraft K3 and the logging PC. After the antennas were sorted, Eric set up a 2kW Honda inverter-generator, installed a ground-rod, and ran the extension cord to the station.

Setup having taken longer than anticipated, the ACARA was ready to begin participating on OSPOTA only about 40 minutes into the contest period. Paul took the mic first and the first OSPOTA contact came at 1442 UTC with AD8FQ who was activating Wingfoot Lake State Park (WLK). 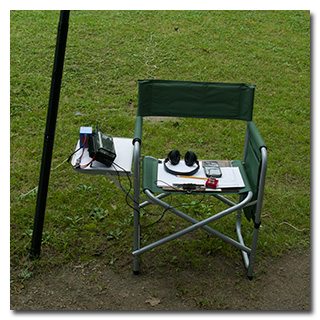 Because Eric was to be on-site for another seven hours, and since the good cell-signal at the site allowed for use of the POTA Spots website (link), Eric chose to attempt to perform this activation as a 100% park-to-park (P2P) activation.

Eric discovered pretty quickly that the 100w signal from the ACARA station caused him considerable QRM regardless of the band he operated on. This wasn't a real problem while the ACARA operator hunted for OSPOTA QSOs but when Jeff took the mic, began running a frequency, and got spotted to POTA Spots, it was nearly impossible for Eric to make QSOs.

Over the period of the OSPOTA event, as ACARA operations allowed, Eric managed to make thirteen POTA P2P QSOs. All of Eric's QSOs were CW and were made at the 5w level.

Paul and Jeff traded the microphone for the first few hours of the OSPOTA operation, and mostly hunted other Ohio State Parks. QSOs were made, but not very quickly. The first few attempts to run a frequency quickly fizzled because OSPOTA rules prohibit self-spotting and it seemed none of the stations worked cared to spot W8UKE to POTA Spots. This changed at 1740 UTC, when Jeff started running a frequency on 40m. Thanks to an initial spot on POTA Spots made by POTA hunter K8RAT, Jeff managed a a run of over two hours during which he made 124 QSOs. 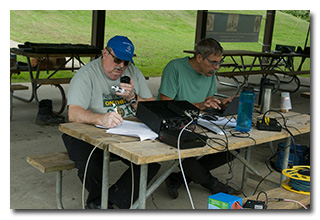 Paul, who is a POTA participant but not (yet) a member of the Southeast Ohio Radio Adventure Team, made thirty-one QSOs on 80m and seventy-four QSOs on 40m, all eligible POTA QSOs, all SSB, and all at 100w. 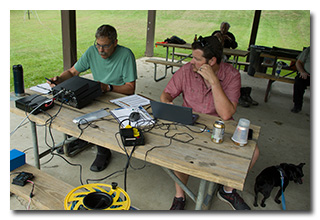 The ACARA made a total of 248 OSPOTA QSOs and worked stations in forty-nine Ohio State Parks. Counting the park ACARA was in as a multiplier as specified in the rules, this produced a score of 12,400 points.

The weather wasn't perfect for outdoor radio operations but it could have been worse. The day started out mostly overcast but changed to light drizzle in the late morning. Those at the Bulldog shelter were treated to the sight of a pair of nesting bald eagles, a pair of blue herons, and a pair of cavorting hummingbirds.