Located outside of the city of Athens and within easy driving distance of Ohio University, Strouds Run State Park draws a mix of trail and lake users. Miles of hiking, mountain biking, and horseback riding provide scenic views from rugged trails. Dow Lake offers boating, paddling, and swimming for both day-use and overnight visitors. A shady seasonal campground, perfect for tent camping, is a short walk to the lake. 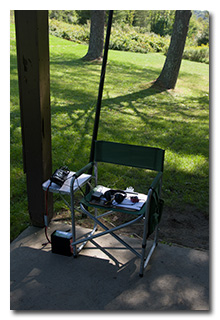 On Saturday, September 11, 2021, one member of the Southeast Ohio Radio Adventure Team performed a successful activation of Strouds Run State Park in Ohio as part of the Parks on the Air (POTA; link) program. Eric McFadden, WD8RIF, performed the activation at the Bulldog Picnic Shelter while other members of the Athens County Amateur Radio Association (link) activated the same park using SSB in the PCARS Ohio State Parks on the Air (OSPOTA, link) operating event.

Eric, who is president of ACARA and served as captain for this year's OSPOTA operation, arrived at the Bulldog Picnic Shelter at about 1200 UTC and shortly thereafter John McCutcheon, N8XWO; Miles McFadden, KD8KNC; and Bob Moore, KC8KSM, arrived. Set-up of the OSPOTA station began. When complete, the station consisted of the ACARA's Elecraft K3 transceiver and a linear power supply; a logging computer; an 80/40m fan dipole, feedline, and mast; and a 2kW Honda inverter-generator, fuel, ground rod, and extension cords.

At about 1445 UTC, after the ACARA OSPOTA operation was underway and running smoothly, Eric set up his POTA station at the other end of the the Bulldog Picnic Shelter. Because Eric's tripod was in use supporting the ACARA's 80m/40m fan dipole, and since there was nothing convenient to strap his mast to, Eric deployed his 28½' wire vertical on his Jackite 31' telescoping fiberglass mast which Eric simply leaned into a tall pine tree. Eric set up his KX3 on his folding camp-chair adjacent to the mast and was on the air at 1453 UTC. 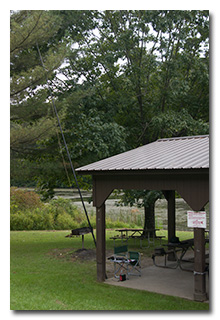 Because Eric was to be on-site for another seven hours, and since the good cell-signal at the site allowed for use of the POTA Spots website (link), Eric chose to attempt to perform his first 100% park-to-park (P2P) activation.

Eric didn't attempt to validate his activation in one sitting, but spent time with the ACARA, checking POTA Spots occasionally for possible P2P opportunities. 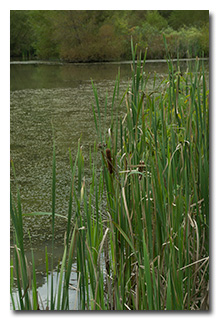 Finally, in what turned out to be the highlight of the activation, on 20m at 2052 UTC, Eric worked EC1R who was activating Montana Palentina (Fuentes Carrionas y Fuente Cobre) Nature Park (EA-0121) in Castile and Leon, Spain.

In all, Eric made thirteen QSOs, all of which were P2P QSOs. All of Eric's QSOs were CW and were made at the 5-watt level. 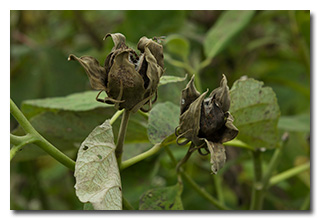 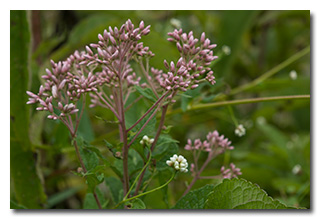 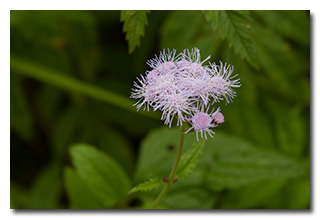