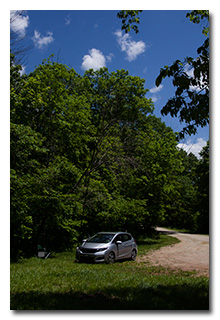 On Sunday, May 31, 2020, one member of the Southeast Ohio Radio Adventure Team performed his twentieth successful activation of Strouds Run State Park in Ohio as part of the Parks on the Air (POTA; link) program, earning himself his first POTA Repeat Offender Award.

On a beautiful Spring morning, Eric McFadden, WD8RIF, performed the activation at Stroud Run State Parks's Horseman's Area while maintaining proper social distancing during the coronavirus (COVID-19) crisis. Eric was accompanied by his wife Vickie and their two small dogs, Theo and Mindy. Eric had scheduled this activation for the early afternoon so he could be home during the morning to watch the docking of the first crewed commercial flight to the International Space Station.

Eric, Vickie, and the dogs arrived at the Horseman's Area at about 1550 UTC to find the area to be free of pick-up trucks and horse-trailers but already occupied by several cars. However, all the occupants of the cars were absent, and were probably hiking the trails, so Eric parked his car at his now-usual location at the extreme edge of the parking area and deployed his 28½' wire vertical on his Jackite 31' telescoping fiberglass mast and drive-on mount. Because of the need to ensure social distancing, Eric set up his KX3 inside the car. Eric was on the air by 1605 UTC.

Eric began operations on 80m and quickly made a QSO at 1608 UTC with his good friend K8RAT in central Ohio. In the hope of making a QSO on a band neither had often used, Eric and Mike changed to 60m but no QSO was possible there. Eric switched to 40m at 1616 UTC. 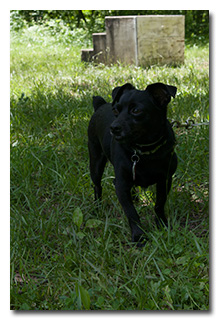 Eric's first QSO on 40m was a Park-to-Park (P2P) QSO at 1619 UTC with K0BWR who was activating Perry State Park, K-2347, in Kansas. QSOs came briskly on 40m with Eric's eleventh QSO on 40m coming at 1636 UTC. This run included a P2P QSO with WA9LEY who was activating William G. Stratton State Park, K-1032, in Illinois. Fading on 40m was swift and deep, with more than one station completely disappearing before the QSO could be completed. Eric changed to 30m at 1637 UTC.

Eric's first QSO on 30m came at 1640 UTC with W8AEW in Michigan. QSOs came steadily, with Eric's sixth QSO on 30m coming at 1650 UTC with N5VR in Texas. This run included a second P2P QSO with K0BWR who was still activating Perry State Park in Kansas. Eric changed to 20m at 1652 UTC.

Eric had to go high in the CW band on 20m to find a spot free of CQ Worldwide Worked All Prefixes (CQ WW WPX) activity and managed only one QSO on 20m, at 1658 UTC with NG5E in Texas, before deciding it was time end his operation.

In all, Eric made nineteen QSOs, including one duplicate QSO on 40m, with three P2P QSOs with operators at two parks. All of Eric's QSOs were CW and were made at the 5-watt level.