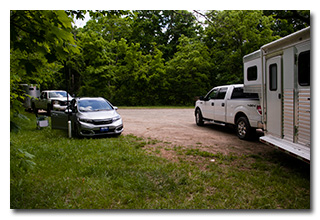 On Saturday, May 30, 2020, one member of the Southeast Ohio Radio Adventure Team performed a successful activation of Strouds Run State Park in Ohio as part of the Parks on the Air (POTA; link) program. On a beautiful Spring morning, Eric McFadden, WD8RIF, performed the activation at the park's Horseman's Area while maintaining proper social distancing during the coronavirus (COVID-19) crisis. Eric was accompanied by his small dog, Theo. Eric had scheduled this activation for the morning so he could ensure being home in time for the 1922 UTC launch of the first crewed commercial flight to the International Space Station.

Eric and Theo arrived at the Horseman's Area at 1505 UTC to find the area to be already occupied by several pick-up trucks and horse-trailers, with several horses already out, being readied for riding. Eric parked his car at his now-usual location at the extreme edge of the parking area and deployed his 28½' wire vertical on his Jackite 31' telescoping fiberglass mast and drive-on mount. Because of the need to ensure social distancing, Eric set up his KX3 inside the car. Eric was on the air by 1515 UTC.

This activation was to be a graphic demonstration of the importance of the POTA spotting-network located at POTA.us (link). 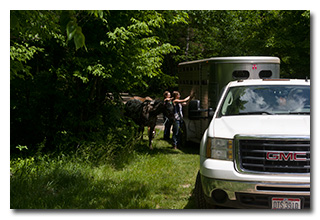 Eric began calling "CQ POTA" 80m but when he attempted to self-spot himself, he found that he had allowed his cell-plan to expire two days previously. After this discovery, Eric switched to 40m, figuring this band would be the best for the Reverse Beacon Network (RBN) to see him and POTA.us to automatically spot him from the RBN data.

Eric called "CQ POTA" for almost ten minutes before hearing a reply to his calls, an indication that, perhaps, the POTA.us spotting system wasn't being updated from RBN. Eric's first QSO on 40m came at 1524 UTC with N4ZN in New York. Eric's second QSO came at 1526 UTC with WW1X who was participating in the CQ WW WPX contest. Over the next twenty minutes or so, Eric continued to call "CQ POTA" but received no answers to his call except for a call from N4ZN to say he would spot Eric. Unfortunately, some sort of problem prevented Michael from being able to spot Eric, but Michael did announce Eric on the POTA Facebook page. After a few more minutes of no QSOs, Eric decided to quit temporarily, return home, buy more plan-time for his phone, and return to Strouds Run State Park for a second attempt at the activation.

After successfully buying more time for his phone, Eric and Theo arrived back at the Horseman's Area at 1650 UTC, again finding the area to be occupied by pick-up trucks and horse-trailers. Eric parked his car at the extreme edge of the parking area, deployed his 28½' wire vertical on his Jackite 31' telescoping fiberglass mast and drive-on mount, and set up his KX3 inside the car. Eric was on the air for this second attempt at 1659 UTC.

Eric confirmed his now-restored ability to self-spot and send texts, started calling "CQ POTA" on 80m, and self-spotted himself at POTA.us. After several minutes of no replies, and after the receipt of a text from K8RAT that he had no copy of Eric on 80m, Eric switched to 40m.

Eric's first QSO on 40m came at 1708 UTC with WB2SMK. Thanks to a self-spot on POTA.us, QSOs on 40m came at a furious pace, with Eric's 11th QSO during this second session coming at 1718 UTC with K5KHK in New York. This fast run of QSOs included a completely unexpected QSO with K8RAT, who can almost never work this park on 40m, and a Park-to-Park (P2P) QSO with K0BWR who was performing an activation of Eisenhower State Park, K-2335. Eric switched to 30m at 1723 UTC.

Eric had to tune high in the 20m band to get away from heavy CQ WW WPX activity. He self-spotted on POTA.us and began calling "CQ POTA" but at 1743 UTC, with no QSOs yet made, decided to call it a day when QRM began to appear on the frequency.

In all, Eric made eighteen QSOs over the two sessions at the park, with four P2P QSOs with operators at three parks. All of Eric's QSOs were CW and were made at the 5-watt level.