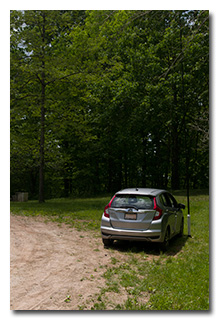 On Sunday, May 24, 2020, one member of the Southeast Ohio Radio Adventure Team performed a successful activation of Strouds Run State Park in Ohio as part of the Parks on the Air (POTA; link) program. On an uncomfortably hot day, Eric McFadden, WD8RIF, performed the activation at the park's Horseman's Area while maintaining proper social distancing during the coronavirus (COVID-19) crisis. Eric was accompanied by his small dog, Theo.

Eric and Theo arrived at the Horseman's Area at 1645 UTC to find the area to be empty except for one family picnicking. Eric parked his car at his now-usual location at the extreme edge of the parking area, a good distance away from the picnickers, and quickly deployed his 28½' wire vertical on his Jackite 31' telescoping fiberglass mast and drive-on mount. Because of the need to ensure social distancing, Eric set up his KX3 inside the car. Eric was on the air by 1655 UTC.

Starting on 80m, Eric's only QSO there was with his good friend K8RAT at 1702 UTC. After his subsequent calls of "CQ POTA" went unanswered, Eric switched to 40m at 1705 UTC. 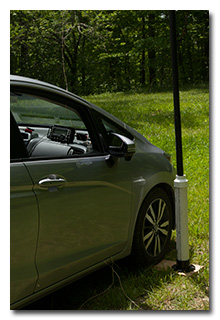 QSOs on 20m were slow to start coming and Eric had almost given up hope for any QSOs on 20m when a QSO was made at 1732 UTC with W0YJT in Kansas. Thereafter, QSOs came steadily, with Eric's sixth QSO on 20m coming at 1740 UTC with NG5E in Texas, whom Eric had worked earlier on 40m. During this run, Eric made a QSO with OH1XT in Finland, whom Eric has worked from parks several times in the past. Also during this run, Eric was startled by a hummingbird hovering in the open doorway of the car. Eric switched to 30m at 1742 UTC.

No QSOs resulted from Eric's calls of "CQ POTA" on 30m. During part of the time he was letting his KX3 call "CQ POTA" on 30m, Eric chatted with an elderly gentleman who had stopped to ask for directions to the Strouds Run beach area.

In all, Eric made seventeen QSOs, with one P2P QSO. All of Eric's QSOs were CW and were made at the 5-watt level.

Band conditions for this activation were very poor. Unlike during yesterday's activation, however, none of the bands used were noisy. All the stations Eric worked on 80m and 40m were weak, with Eric giving no RST higher than "559"; his signal seemed to be equally weak at the other end, with him receiving lots of reports of "559" and even one report of "319". Signals on 20m were stronger, with Eric giving "599" for each of his six QSOs on 20m.