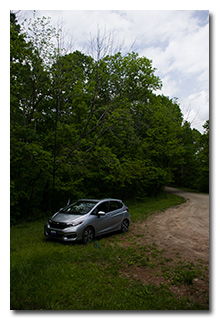 On Saturday, May 23, 2020, one member of the Southeast Ohio Radio Adventure Team performed a successful activation of Strouds Run State Park in Ohio as part of the Parks on the Air (POTA; link) program. On a lovely Spring day following almost a week of rain, Eric McFadden, WD8RIF, performed the activation at the park's Horseman's Area while maintaining proper social distancing during the coronavirus (COVID-19) crisis. Eric was accompanied by his small dog, Theo.

Eric and Theo arrived at the Horseman's Area at 1650 UTC to find the area to be completely empty. (Where were the trucks and horse trailers Eric encountered last time? The weather would have been ideal for riding. Were the trails too muddy from the rain to risk taking the horses on?)

Eric parked his car at the extreme edge of the parking area, and while Theo explored, Eric quickly deployed his 28½' wire vertical on his Jackite 31' telescoping fiberglass mast and drive-on mount. Because of the need to ensure social distancing should others arrive, Eric set up his KX3 inside the car. Eric was on the air by 1702 UTC.

Starting on 80m, Eric's only QSO there was with his good friend K8RAT at 1707 UTC. After his subsequent calls of "CQ POTA" went unanswered, Eric switched to 40m at 1712 UTC.

Eric's first QSO on 30m was a result of Eric using POTA Spots to make a Park-to-Park (P2P) QSO at 1747 UTC with K0BWR who was activating Clinton State Park in Kansas. (It's possible that this was Eric's second P2P QSO of the day; K0BWR had worked Eric earlier on 40m, but Steve hadn't mentioned during that QSO that he was at a park.) QSOs came steadily on 30m, with Eric's fifth QSO on 30m coming at 1801 UTC with W1OPR in Maine.

In all, Eric made twenty QSOs, with one P2P QSO. All of Eric's QSOs were CW and were made at the 5-watt level.

Band conditions for this activation were very poor. On all the bands he used, Eric heard intermittent "dial telephone dialing-clicks" noise which he initially thought was local, but K8RAT later confirmed he, also, was hearing it on several bands at his QTH in central Ohio. Deep and fast signal fading was also a problem—Eric heard several stations answer his calls of "CQ" but these stations disappeared entirely before being able to give their exchange.