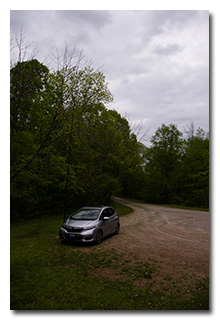 On Friday, May 15, 2020, one member of the Southeast Ohio Radio Adventure Team performed a successful activation of Strouds Run State Park in Ohio as part of the Parks on the Air (POTA; link) program. On a pleasant spring day that threatened rain to arrive later, Eric McFadden, WD8RIF, performed the activation at the park's Horseman's Area while maintaining proper social distancing during the coronavirus (COVID-19) crisis. Eric was accompanied by his small dog, Theo.

Eric and Theo arrived at the Horseman's Area at about 1530 UTC to find the area to be completely empty. Eric parked his car at the extreme edge of the parking area and quickly deployed his 28½' wire vertical on his Jackite 31' telescoping fiberglass mast and drive-on mount. Because of the need to ensure social distancing, Eric set up his KX3 inside the car. Eric was on the air by 1539 UTC.

Starting on 80m, Eric's only QSO there was with his good friend K8RAT at 1543 UTC. After his subsequent calls of "CQ POTA" went unanswered, Eric switched to 40m at 1545 UTC.

Eric's first QSO on 40m came at 1548 UTC with W8SUN in Virginia. QSOs came blazingly fast on 40m, with Eric making eighteen QSOs in eighteen minutes. Eric's final QSO on 40m came at 1606 UTC with WA8IPA in Michigan. In the middle of the run, Eric made a Park-to-Park (P2P) QSO with K0EMT who was performing an activation of Little Dixie Lake Conservation Reserve (K-5706) in Missouri. Eric switched to 20m at 1612 UTC.

In all, Eric made forty QSOs, with three P2P QSOs. All of Eric's QSOs were CW and were made at the 5-watt level.