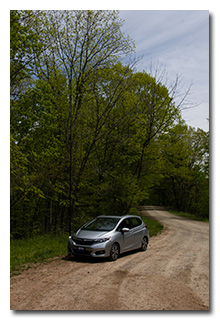 On Sunday, May 10, 2020, one member of the Southeast Ohio Radio Adventure Team performed a successful activation of Strouds Run State Park in Ohio as part of the Parks on the Air (POTA; link) program. On a seasonably-warm and dry spring day, Eric McFadden, WD8RIF, performed the activation at the park's Horseman's Area while maintaining proper social distancing during the coronavirus (COVID-19) crisis.

Eric arrived at the Horseman's Area at 1500 UTC to find the area to be completely empty. Eric parked his car at the extreme edge of the parking area and quickly deployed his 28½' wire vertical on his Jackite 31' telescoping fiberglass mast and drive-on mount. Because of the need to ensure social distancing, Eric set up his KX3 inside the car. Eric was on the air by 1508 UTC.

Immediately upon turning on the radio, Eric found KD3D operating on 40m from Chapman State Park in Pennsylvania. A Park-to-Park (P2P) QSO was quickly made at 1509 UTC. Following this QSO, Eric changed to 80m.

Eric's first QSO on 40m came at 1523 UTC with WD0ACB in Kansas. QSOs came quite briskly on 40m, with Eric's seventeenth QSO on 40m coming at 1546 UTC with WA3TVH in Pennsylvania. During this run, a second P2P QSO was completed, this time with N9MM, who was performing an activation of Sam Houston National Forest in Texas. Eric switched to 20m at 1548 UTC.

Eric's first QSO on 20m came at 1551 UTC with WA7WJR. QSOs also came briskly on 20m, with Eric's thirteenth QSO on 20m coming at 1613 UTC with KN7D in Utah. This run of QSOs included QSOs with several DX stations, including OH1XT and OH1NPW in Finland, IW2NXI in Italy, and F6EOC in France. Eric switched to 30m at 1616 UTC.

In all, Eric made forty-three QSOs,with two P2P QSOs. All of Eric's QSOs were CW and were made at the 5-watt level.