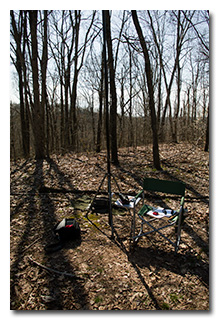 On Saturday, April 4, 2020, one member of the Southeast Ohio Radio Adventure Team performed a successful activation of Strouds Run State Park in Ohio as part of the Parks on the Air (POTA; link) program. Eric McFadden, WD8RIF, performed the activation at the park's Horseman's Area while maintaining proper social distancing during the coronavirus (COVID-19) crisis on a warm and lovely early spring day. Eric was accompanied by his wife Vickie and their two small dogs, Theo and Mindy.

Eric and Vickie had, at this point in the COVID-19 crisis, been working at home for three weeks and the nice early spring day begged for a trip afield for a POTA activation of Strouds Run State Park. Eric chose to operate again at the Horseman's Area because of it was most likely to be empty of other people and because of its high elevation and ease of access. Upon arriving at the Horseman's Area, Eric and Vickie found the place to, indeed, be empty of other visitors, so social distancing was easy to maintain.

Eric, Vickie, and the dogs arrived at the Horseman's Area at about 1830 UTC and Eric deployed his 28½' wire vertical on his 33' MFJ-1910 telescoping mast supported by his staked-down tripod. Eric set up his Elecraft KX3 on his folding camping stool and was on the air by 1844 UTC.

Eric's rig happened to be on 40m when he powered it up, and W0SLW was strong on frequency, participating in the Missouri QSO Party. A quick QSO was made at 1845 UTC.

Eric switched to 80m at 1846 UTC but no QSOs resulted from several minutes of calling CQ. Eric was able to hear his good friend and fellow SEORAT-member K8RAT calling him based on a spot but Mike was unable to hear's Eric return calls.

In all, Eric made thirteen CW QSOs. All of Eric's QSOs were CW and were made at the 5-watt level.

Eric also submitted his log to the World Wide Flora and Fauna in Amateur Radio (WWFF; link) program. although he didn't make enough QSOs to to achieve a valid activation within the program which requires 44 QSOs be made. However, the WWFF program allows these 44 QSOs be made over any number of visits so a valid activation within WWFF is still possible if subsequent visits to the park are made.