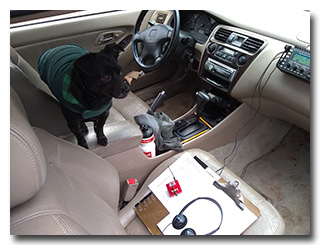 On Sunday, January 12, 2020, one member of the Southeast Ohio Radio Adventure Team performed a successful activation of Strouds Run State Park in Ohio as part of the Parks on the Air (POTA; link) program. Eric McFadden, WD8RIF, performed the activation on a gray, mid-January afternoon at the park's Horseman's Area. Eric was accompanied by his small dog, Theo.

Eric had decided on this impromptu fifth activation of his nearest POTA unit to take advantage of the unseasonably warm weather and had chosen to return to the Horseman's Area because of its high elevation and ease of access.

Eric and Theo arrived at the Horseman's Area at about 1815 UTC and, after finding the least muddy part of the parking lot that wasn't in the flow of traffic, Eric quickly deployed his 28½' wire vertical on his 31' Jackite pole that was held upright by a drive-on base. Eric set up his Elecraft KX3 inside the car. Eric was on the air by 1833 UTC. 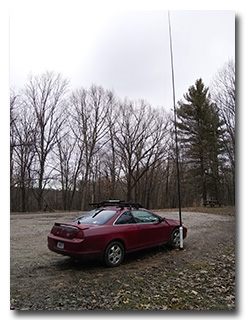 Starting on 80m, Eric's first QSO was with his good friend and fellow SEORAT-member K8RAT at 1837 UTC. This QSO was quickly followed by a QSO with stalwart POTA-Hunter VE3LDT at 1841 UTC and by a QSO with NE4TN at 1843 UTC.

Switching to 20m at 1909 UTC, Eric's first QSO there came at 1912 UTC with W6LEN in California. This was followed almost immediately by a QSO with KE8IHX who was in Logan, Ohio, so this QSO must have been accomplished via 20m ground-wave propagation. Eric's third and final QSO on 20m was with VE5YAK at 1923 UTC.

In all, Eric made fifteen CW QSOs. All of Eric's QSOs were CW and were made at the 5-watt level.

Eric also submitted his log to the World Wide Flora and Fauna in Amateur Radio (WWFF; link) program. although he didn't make enough QSOs to to achieve a valid activation within the program which requires 44 QSOs be made. However, the WWFF program allows these 44 QSOs be made over any number of visits so a valid activation within WWFF is still possible if subsequent visits to the park are made.