Support-Your-Parks Summer 2021 RATpedition, Day 2; parks one and two of eleven

Once the hunting grounds for the Native American Shawnee tribes, the rugged landscape of the 1,095-acre Shawnee State Park offers outdoor adventurers an opportunity to explore the back country of southern Ohio’s Appalachian foothills near the banks of the Ohio River.

Nestled within the 63,000-acre Shawnee State Forest, the area is often called the “Little Smokies.” When combined with the state forest, the scenic trail system offers a variety of options for nature lovers and outdoor enthusiasts. Two lakes provide a variety of boating, fishing, and swimming opportunities.

Shawnee State Forest, also called "The Little Smokies of Ohio," has developed into the largest of Ohio's state forests with more than 60,000 acres. This working forest is managed to provide a variety of multiple uses on a sustained yield basis: Timber harvesting, tree planting, wildlife habitat, forestry research, watershed and soil protection, and production of tree seeds.

During the spring and fall forest fire danger periods, state forest crews detect and suppress wildfires that occur on state and private lands within the surrounding protection area.

Nearly 8,000 acres of the forest have been designated as wilderness. Timber is not managed and public motorized travel has been eliminated in the wilderness area. 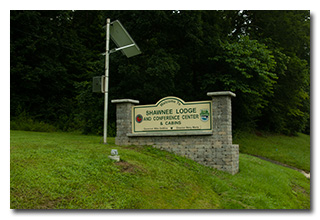 From the hotel in Portsmouth, it was a quick half-hour drive to the Shawnee Lodge and Conference Center, Eric's first stop of the day. Choosing a parking spot in a remote corner of the lot, Eric quickly set up his 28½' wire vertical on his Jackite 31' telescoping fiberglass mast and drive-on mount. Because of his aggressive time schedule, Eric set up his KX3 inside his car. Eric was on the air at 1241 UTC. 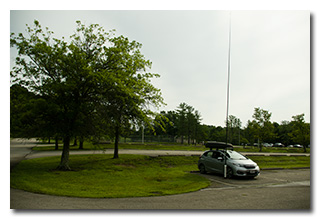 Eric began operations by searching POTA Spots for P2P QSO opportunities and almost immediately made a P2P QSO on 30m with NG5E who was performing a two-fer activation of Homochitto National Forest (K-4497) and Caston Creek Wildlife Management Area (K-7120) in Mississippi.

In all, Eric made twenty-one QSOs, including five P2P QSOs. All of Eric's QSOs were CW and were made at the 5-watt level.