Once the hunting grounds of the Shawnee Indians, the region is one of the most picturesque in the state, featuring erosion-carved valleys and wooded hills. The rugged beauty of the area has earned it the nickname "The Little Smokies." 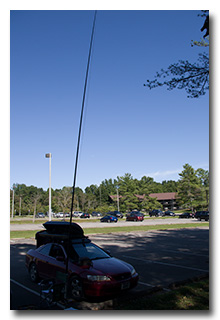 On Sunday, September 16, 2019, one member of the Southeast Ohio Radio Adventure Team performed a successful activation of Shawnee State Park in Ohio as part of the Parks on the Air (POTA; link) program. Eric McFadden, WD8RIF, was accompanied by his wife Vickie, KC8MAJ, and their two small dogs, Theo and Mindy.

After a successful activation of Shawnee State Forest at the Copperhead Lookout Tower (link), the quartet arrived at the Shawnee State Park Lodge parking lot about 1830 UTC and, after visiting the Lodge to take advantage of the facilities, Eric and Vickie set up Eric's station in the shade of tall trees on one side of the Lodge parking lot. Eric chose to deploy his 28½' wire vertical supported on his 31' Jackite telescoping fiberglass mast held upright by a drive-on base. Eric set up his KX3 on his folding camp-chair adjacent to the mast. Eric was on the air at 1907 UTC.

Eric had enough cell-signal to send a text to his friend and fellow Radio Adventure Team member Mike, K8RAT, to arrange a QSO on 80m. A QSO with K8RAT was successfully made at 1909 UTC.

Suddenly realizing the Texas QSO Party was to end in aout half a hour, Eric switched to 20m and "hunt and pounce" mode and managed six QSOs on 20m with stations participating in the contest. The firt came at 1929 UTC with W5GN and the last came at 1958 UTC with K5FP.

Eric was happy to have made enough QSOs to validate his activation and was pleased that all of his QSOs on 80m and 40m were with stations he recognized as being POTA Hunters. However, he was concerned that it took working stations participating in the Texas QSO party to validate the activation. 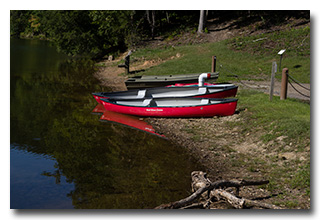 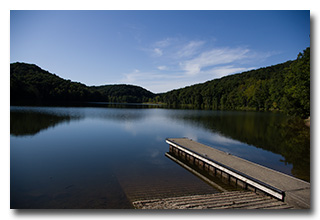