During World War I, the area that is now Scioto Trail State Forest was used as an artillery range for Camp Sherman. Seventy-five millimeter guns and six-inch howitzers were set up at the mouth of Stoney Creek on the Scioto River and fired at targets in the general area of Stewart and Caldwell lakes.

The purchase of land for the state forest began in 1922, and most of the present forest area was purchased by 1937. The first 9,088 acres cost an average of $7.70 per acre. The forest was named after the Native American trail that ran from what is now Chillicothe to Portsmouth. They called it the Scioto Trail. Route 23 follows the path of the trail. The major development of the area took place in the 1930s when the Civilian Conservation Corps built most of the roads, lakes and early recreational facilities. The forest now covers 9,600 acres.

Scioto Trail State Forest maintains 26 miles of bridle trails for day use by horseback riders and hikers. Mountain bikes are also permitted on these trails.

Six miles of paved roads and 18 miles of gravel roads provide good access to all areas of the forest. Scenic vistas and overlooks on several of the roads attract many visitors year-round, but especially during the fall when the leaves are turning color.

Populations of deer, wild turkey, squirrel and grouse encourage many hunters to pursue their favorite sport at Scioto Trail State Forest. Mushroom hunting in the spring is attracting more and more visitors to the forest each year.

The 250-acre Scioto Trail State Park consists of two areas in the middle of the state forest. Two 15-acre lakes, a campground, two primitive camping areas, picnic areas, trails and a sled hill are all located within the park. 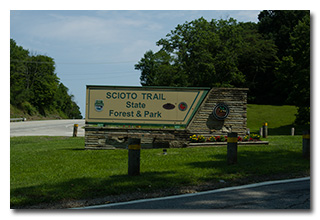 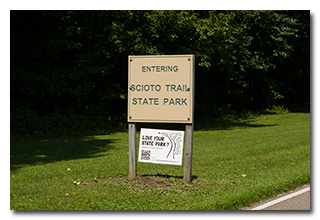 Eric arrived at the high-elevation point within Scioto Trail State Park at which had intended to operate but discovered it to be the campground. (Actually, later study of the map disclosed that a turn onto a minor road had been missed, meaning the campground was found by error.) Eric returned slowly down the hill from the campground until he found the small parking area adjacent to the Scioto Trail Island Gazebo. Satisfied that this was a location at which he could set up his antenna and which also had cell-signal, Eric chose to operate there. He quickly deployed his 28½' wire vertical on his Jackite 31' telescoping fiberglass mast and drive-on mount. Because of his aggressive schedule, Eric set up his KX3 inside his car. Eric was on the air at 1613 UTC. 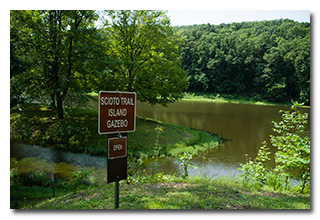 Eric began operations by finding himself a frequency on 40m and by 1625 UTC he had completed ten QSOs. This run included a P2P QSO with KN4RBN who was activating Guilford Courthouse National Military Park (K-0718) in North Carolina. 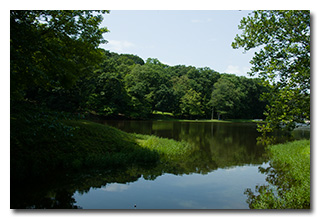 Returning to 40m, Eric made an additional five QSOs in about ten minutes.

Switching to 30m, Eric made four more QSOs in about six minutes.

In all, Eric made twenty QSOs, including two P2P QSOs. All of Eric's QSOs were CW and were made at the 5-watt level. 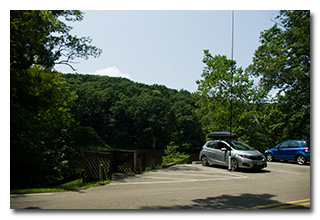