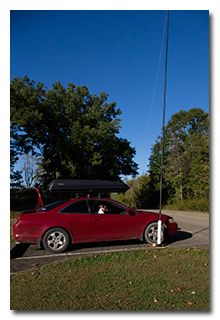 On Saturday, October 12, 2019, two members of the Southeast Ohio Radio Adventure Team performed a successful activation of Salt Fork State Park in Ohio as part of the Parks on the Air (POTA; link) program while also participating in the ARP ARCI's Fall QSO Party. Eric McFadden, WD8RIF, and Miles McFadden, KD8KNC, performed that activation of Salt Fork State Park following their visit to the Parkersburg / Wood County Hamfest and successful activations of Sunfish Creek State Forest (link) and Barkcamp State Park (link). This was the third of three activations planned for the day.

During the drive from Barkcamp State Park a severe traffic-backup on I-70 nearly doomed the activation of Salt Fork State Park. Fortunately, Miles and Eric were at an exit when they encountered the stopped traffic and Miles was able to find an alternate route to Salt Fork State Park and only about half-an-hour was lost due to the detour.

Eric and Miles arrived at Salt Fork State Park under clear skies at about 2030 UTC and chose the picnic area nearest the Salt Fork Marina for their operation. Because the temperature remined low, Eric chose to operate in the car and he and Miles deployed the 28½' wire vertical on the 31' Jackite telescoping fiberglass mast supported on the drive-on mount, the KX3 was hung on the car's glove-box door, and Eric was on the air at 2047 UTC. 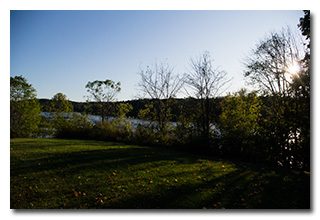 While trying to find an open frequency on 40m, Eric found W4QO calling CQ for the QRP ARCI's Fall QSO Party. Eric answered Jim's call and made his only Fall QSO Party QSO at 2100 UTC. Finding his own frequency, Eric began calling CQ and a QSO with N2ESE resulted at 2104 UTC. QSOs came quickly, with Eric's fourteenth QSO on 40m coming at 2124 UTC with K5KDG. When subsequent calls of CQ went unanswered, Eric switched to 20m at 2128 UTC. 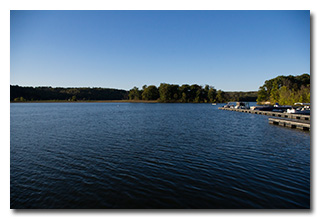 Eric's first QSO on 20m was with W6LEN at 2134 UTC. QSOs on 20m came steadily, with Eric's seventh QSO coming at 2142 UTC with N9MM who was activating Sam Houston National Forest in Texas.

Eric was pleased to have made a Park-to-Park (P2P) QSO and was pleased to have worked W4QO, a former president of the QRP ARCI, in the Fall QSO Party but he was disappointed he made only one QSO in that operating event. Eric's QSOs were CW and were made at the 5-watt level.

Miles did not operate but helped immensely with navigation, helped with station set-up and tear-down, and performed much of the activation photography.