Located in Morrow County near the center of the state, Mt. Gilead State Park is a peaceful, wooded park. The 191-acre park offers picnicking, fishing and hiking as well as a full-service campground. 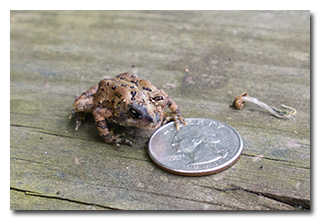 Eric, Miles, and Mike arrived at Mt. Gilead State Park at about 1800 UTC. The park being tiny, it took the trio no time at all to select the grassy area adjacent to the park's swing-park are for the operation. Mike chose not to operate since he can return to this park, which is very near his home QTH, at any time for an activation. Eric deployed his MFJ-1910 33' fiberglass mast to support his 28½' end-fed wire vertical with three 17' radials, set up his KX3 on his folding camping chair's swing-up table, and was on the air by 1813 UTC.

Band conditions on 40, 30, and 20m remained good and it took Eric just a bit more than a half-hour to make thirteen QSOs, including a park-to-park QSO and a POTA-to-SOTA QSO.

Because Mike had noticed a POTA Spot for an operation currently doing CW on 20m, Eric's first QSO came at 1814 UTC with AG7CC who was performing a POTA activation of Dworshak State Park, K-2232, in Idaho.

Moving to 40m, Eric began calling "CQ POTA" and was rewarded with a QSO with N2ESE at 1819 UTC. Seventeen minutes brought eight QSOs on 40m, with Eric's final QSO on 40m coming at 1836 UTC with VE3ZN.

Returning to 20m, Eric's first QSO there came at 1839 UTC with VE2UFT who was performing a Summits on the Air (SOTA) activation; unfortunately, Jean didn't send his SOTA designator during the QSO and Eric couldn't hang around to learn the designator. Five minutes brought three more QSOs on 20m, with Eric's thirteenth and final QSO being with W0YJT at 1847 UTC.

Because of the significant drive required to get to the next destination, Mohican-Memorial State Forest, Eric quickly tore down and packed away his station so he and Miles could take their leave of Mike and depart Mt. Gilead for Mohican-Memorial.

The strangeness with spotting noticed at Delaware State Park remained a problem but both Mike and Miles worked to keep Eric's spots on the POTA Spots website (link) accurate. Thanks, guys!