Located in northeastern Ohio, the 1,110-acre Mohican State Park and the adjacent 4,525-acre state forest offer outstanding opportunities for visitors to explore one of Ohio's most stunning natural regions. Visitors can truly experience the wilderness, venturing through the hemlock forest to take in the striking views offered by the Clear Fork Gorge and fish-laden Clear Fork River. Hikers and mountain bikers can enjoy a challenge on the acclaimed 25-mile trail and relax in the evening at the luxurious Mohican State Park lodge or cabins along the meandering river. 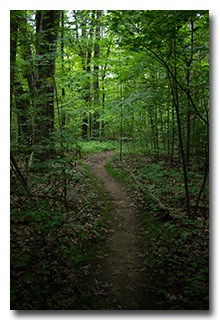 In order for this set of five POTA activations to be eligible for the five-unit POTA Rapid Deployment (RaDAR) award, Eric and Miles hiked from Mohican-Memorial State Forest along the mountain bike / snowmobile trail to the fire tower in Mohican State Park, a hiking distance of 1 kilometer. For this trek, Eric carried his Enhanced KX3 Travel Kit backpack, with his newly-acquired and as-yet-untested Goture Red Fox Super Hard 720 carbon fiber mast carried in an external pocket on the backpack. Miles carried the folding camp chair, N2CX-inspired 20/30/40m wire vertical and feedline, and clipboard.

Eric and Miles arrived at the Mohican State Park fire tower at about 2120 UTC, almost 90 minutes later than Eric had anticipated. Eric and Miles deployed the Goture Red Fox Super Hard 720 pole, using a screwdriver as a spike, and used the carbon fiber pole to support the N2CX 20/30/40m wire vertical with four radials. Eric deployed his KX3 on his folding camping chair's swing-up folding table. Eric was on the air by 2138 UTC.

During the hike, the Solar-Terrestrial K-Index had reached 5 and by the time Eric had his station set up, band conditions were terrible.

Starting on 40m, Eric began calling "CQ POTA" and was rewarded at 2145 UTC with a reply from N2ESE. A second QSO on 40m followed at 2151 UTC with W9AV and Eric began to think that, perhaps, band conditions weren't really all that terrible. However, continued calls of CQ on 40m failed to provide any more QSOs and Eric chose to switch to 20m at 2205 UTC. 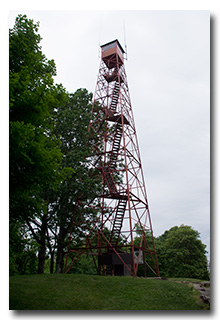 On 20m, many minutes of calling CQ failed to provide even a single QSO. Eric returned to 40m and tried to work participants in the SKCC Weekend Sprintathon (WES) — Eric has an SKCC number and was able to send with a manual key during any resulting QSOs — but even the strongest of the WES stations steadfastly refused to hear Eric's signal.

Switching to 30m, Eric's CQs finally resulted in some more QSOs. N4DPM was worked at 2235 UTC, AA5UZ was worked at 2238 UTC, and VE3ZN was worked at 2239 UTC. Had conditions improved to the point that QSOs would more easily come? Apparently not. Eric's continued calls of CQ failed to produce any QSOs and WES participants still couldn't hear Eric.

At 2309 UTC Eric decided to drop the N2CX-inspired vertical and deploy his 28½' end-fed wire with the center of the wire supported by the carbon fiber pole as an inverted-vee, with three 17' radials on the ground. Perhaps the longer wire "heard" better than the tri-bander, or perhaps the ionosphere had recovered a bit from the solar storm, because WES stations were stronger by the time Eric got the inverted-vee deployed. However, even with the inverted-vee, the WES participants still couldn't hear Eric.

The 28½' inverted-vee had one distinct advantage over the N2CX-inspired vertical — it is a non-resonant antenna not fed with coax and can be used on any frequency for which the KXAT3 autotuner in the KX3 can find a reasonable match. Eric found that the KXAT3 could provide a match of a bit better than 3:1 on 80m so he and his friend and fellow Radio Adventure Team member Mike Hansgen, K8RAT, managed to make a QSO on 80m at 2311 UTC with Mike giving Eric a signal report of 229. Eric and Mike were also able to complete a QSO on 60m at 2313 UTC, where Mike gave Eric a report of 339.

Seven QSOs down and three to go with only about forty-five minutes left in which to validate the activation... (POTA rules require that all QSOs be made within one UTC day so Eric had to get his ten QSOs before 0000 UTC or he would fail to validate his attempted activation.) Eric continued to call CQ on the various bands and to try to work WES stations using the 28½' inverted-vee but no additional QSOs resulted. 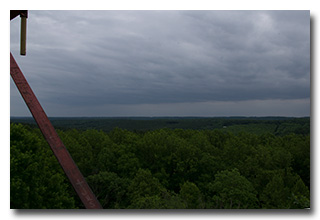 This was by far the most difficult POTA or NPOTA operation Eric had ever performed. Why did it take a full two hours to make just ten QSOs — even when half of those QSOs were arranged? Was it the fault of the solar storm? Is the N2CX-inspired vertical a miserable antenna? Were all the POTA hunters no longer looking for Eric because he had been so late getting to the fifth park? It might have been be a combination of all these things although, since Eric had had success with the N2CX-inspired vertical in Florida, he has to think the wire vertical isn't all that terrible an antenna.

As for the Goture Red Fox Super Hard 720 pole, it performed as well as could be expected. Prior to deployment, Eric had removed the top two elements because they're really too whippy to be of any value when supporting even a lightweight antenna. Even with the top two sections removed, the pole is tall enough to fully support the N2CX-inspired vertical's radiator completely off the ground. The antenna's match on 20m was as good as it has been when the antenna was supported on a fiberglass mast. The match on both 30m and 40m was a bit worse with the carbon fiber mast but not so bad the antenna couldn't be used and Eric's experience with the N2CX-inspired vertical is that is sensitive to location on the two lower bands, anyway, so it's likely the carbon fiber mast isn't conductive enough to seriously detune the antenna. An unexpected bonus was the mast's ability to support the 28½' wire as an inverted-vee in an emergency. Eric had purchased the Goture Red Fox Super Hard 720 pole for bicycle-portable operations because the pole weighs almost nothing, it collapses to about 28" in length, it's long enough when extended to easily support the N2CX-inspired vertical, and it is inexpensive. The pole does appear to be good enough to keep testing. 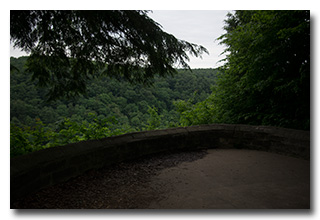 After tear-down and before beginning the 121-mile drive back to their home in Athens, Ohio, Eric and and Miles drove the short distance to see the Gorge Overlook before full darkness fell.