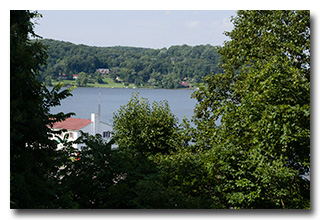 Eric and Miles arrived at Lake White State Park at about 2045 UTC. A few minutes of exploring led the duo to the picnic shelter located on a bluff overlooking the lake. Eric and Miles deployed the 28½' end-fed vertical supported on an MFJ-1910 33' fiberglass mast and set up the KX3 on Eric's folding camping chair. Eric was on the air by 2103 UTC.

Eric began operations on 80m for a QSO at 1918 UTC with his friend and fellow SEORAT-member, K8RAT. Not expecting much additional activity on 80m at that time of day, Eric switched to 40m to continue operations.

As soon as the first spot appeared, the QSOs began. Eric's first QSO on 40m came at 2108 UTC with N2ESE. QSOs came more slowly than at the previous four parks. Twelve minutes brought six QSOs on 40m, with the final QSO there being a park-to-park QSO coming at 2120 UTC with NJ3K, who was performing an activation of the Flight 93 National Memorial, K-0774. 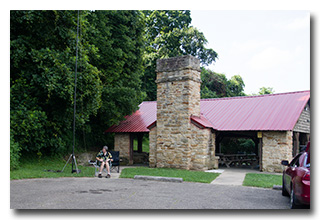 Switching to 20m, Eric's first QSO there came at 2127 UTC with KO4SB. Eleven minutes brought four QSOs on 20m with the final QSO there coming at 2138 UTC with WT4U.

Switching to 30m, Eric made a single QSO there at 2143 UTC with W4A, the Apollo 11 50th Anniversary Special Event Station in Huntsville, Alabama.

All Eric's QSOs were CW and were made at the 5-watt level. Miles didn't operate but helped with set-up and tear-down, photography, spotting, and navigation.