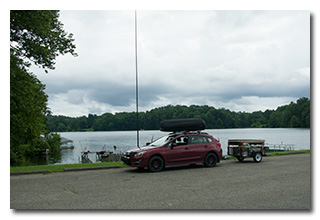 On Saturday, August 6, 2022, two members of the Southeast Ohio Radio Adventure Team performed a successful activation of Lake Logan State Park in Ohio as part of the Parks on the Air (POTA; link) program.

Following a successful activation of Rockbridge State Nature Preserve (link), Eric McFadden, WD8RIF, and Miles McFadden, KD8KNC, stopped at Lake Logan State Park while enroute home from the Voice of Aladdin ARC Columbus Hamfest on a warm day that threatened rain, arriving at the fishing peninsula at about 1940 UTC. They were accompanied by little dog Theo. Eric and Miles set up the 28½' wire vertical on a Jackite 31' telescoping fiberglass mast and drive-on mount. Because of the threat of rain, they set up Eric's KX3 inside Miles' Subaru. Eric was on the air at 1949 UTC.

As at his previous activation of this park, Eric had good cell-signal at this location and he was able to spot himself on POTA Spots (link) and to use POTA Spots to identify possible park-to-park (P2P) QSO opportunities. 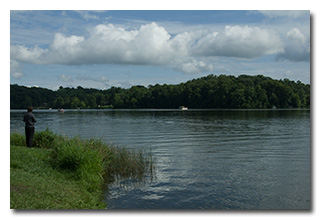 Eric began his operation on 40m, finding himself a frequency to run and calling "CQ POTA". Eric's first QSO came at 1951 UTC with AB9AI in Wisconsin. QSOs came steadily on 40m, with Eric's tenth QSO coming at 2011 UTC with AB8MR in Georgia. This run included QSOs with operators located in Wisconsin, Virginia, North Carolina (2), Kentucky, Illinois (2), Ontario, Connecticut, and Georgia.

After the run on 40m, Eric checked POTA Spots for P2P QSO possibilities and spent several minutes attempting to make P2P QSOs on 20, 30, and 40m but no QSOs were made.

Finding a frequency to run on 30m, Eric updated his spot and began calling CQ. His first QSO in this run came at 2023 UTC with W3DET in North Carolina. QSOs came steadily on 30m, with Eric's seventh QSO on this band being a P2P QSO at 2031 UTC with AF8E who was activating Shallenberger State Nature Preserve (K-9430) in Ohio. (AF8E practically owns Lake Logan State Park within POTA, having performed 70 activations of the park at the time of this report.) This run on 30m included QSOs with operators located in North Carolina, Georgia, Tennessee, Florida, Georgia, Missouri, and Ohio.

In all, Eric made seventeen QSOs, including one P2P QSO, in forty-two minutes. All of Eric's QSOs were CW and were made with five watts output.

Miles did not operate but helped with set-up and tear-down, walked Theo-dog, and did much of the activation photography.