One member of the Southeast Ohio Radio Adventure Team succeeded in performing a valid activation of Lake Logan State Park, K-1969, in Ohio as part of the the Parks on the Air (POTA; link) program. Eric McFadden, WD8RIF, visited Lake Logan State Park on a sunny and hot, post-thunderstorm Sunday afternoon in late May.

Arriving at the spillway parking lot about 2010 UTC, Eric first took a few snapshots of the spillway and the geese playing thereon, then deployed his 28½' end-fed wire supported on his 33' MFJ-1910 telescoping fiberglass mast. Because no shade was available, Eric chose to operate in his car, although the day was so hot and humid, sitting in the car probably wasn't much more comfortable than sitting in the direct sun. Eric was on the air at 2024 UTC.

In hopes of working his good friend and fellow SEORAT member, K8RAT, Eric phoned Mike to arrange an 80m QSO. Unfortunately, while Eric could hear Mike well enough for a QSO, Mike couldn't hear Eric well at all and no QSO was made. This pattern of Eric-hears-Mike-but-Mike-doesn't-hear-Eric has become clear. Eric speculates that the extremely low noise floor at the parks allows him to hear signals that would be buried in the noise-floor at home-based stations such as Mike's. 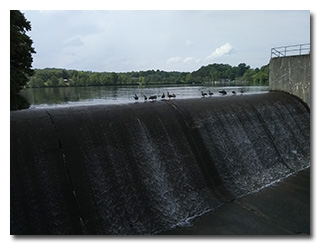 Changing to 40m, Eric called "CQ Pota" about four times before a first reply put W3LL in the log at 2030 UTC. Thereafter, QSOs came one after another, with the twelveth QSO on 40m coming just thirteen minutes later at 2043 UTC. Changing to 30m, Eric managed two QSOs there pretty quickly once he was spotted. Finally, Eric changed to 20m and worked two stations participating in WPX CW, neither of which was DX. With sixteen QSOs coming in just about thirty minutes, this POTA activation was just about the easiest activation Eric had had to date.