On Sunday, January 30, 2022, one member of the Southeast Ohio Radio Adventure Team participated in Winter Field Day (link)while performing a successful two-fer activation of Lake Hope State Park and Zaleski State Forest in Ohio as part of the Parks on the Air (POTA; link) program. 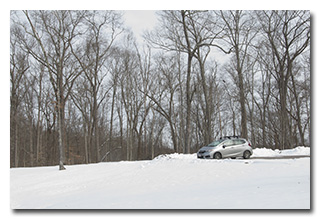 After a brisk drive on the unplowed Irish Ridge, a former pro-rally special stage road, to see how well his snow-tire-equipped Honda Fit performed, Eric arrived at Keeton Cemetery at 1507 UTC and quickly set up his 28½' wire vertical on his Jackite 31' telescoping fiberglass mast and drive-on mount, and set up his KX3 inside his car. Eric was on the air at 1515 UTC.

As at his previous visits to Keeton Cemetery, Eric found he had sufficiently-strong cell-signal to allow him to use the POTA Spots website (link) to spot himself and to look for possible park-to-park (P2P) QSOs. Having decided to perform this operation as a straight WFD effort, Eric didn't spot himself on POTA Spots or consult POTA Spots for P2P QSO opportunities.

Finding a frequency to run on 40m, Eric's first QSO came almost immediately, at 1518 UTC, with K9NN in Indiana. Despite running only 5w into a compromise field antenna, Eric was able to successfully run the frequency and QSOs came quickly, with his fifteenth QSO coming at 1530 UTC with N9UNX, who was also in Indiana. This run included QSOs with stations in Indiana (2), Illinois (3), New Jersey, Georgia (2), Virginia (2), Maryland/DC, Michigan (2), and Ohio.

Since band/mode is a multiplier in WFD, Eric went to 15m and used hunt-and-pounce to work three stations in France participating in the REF Contest. Eric worked F5UQE in Department 59 at 1543 UTC, F5PHY in Department 24 at 1445 UTC, and TM5G in Department 44 at 1546 UTC, guessing correctly that these stations needed a serial number from him. Eric logged these stations for his WFD submission as "1H DX".

With hopes of gaining more multipliers, Eric checked 80m and 10m but no signals were heard and no QSOs were made.

In all, Eric made twenty WFD QSOs in thirty-eight minutes. All of Eric's QSOs were CW and were made at the 5-watt level.

Eric's calculated score, including 500-point bonuses for emergency power, operating outdoors, and operating "not at home", was 2,140 points.