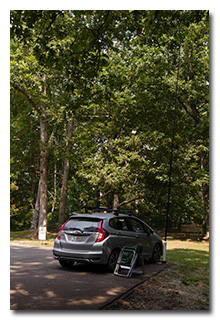 On Saturday, August 7, 2021, one member of the Southeast Ohio Radio Adventure Team performed a successful two-fer activation of Lake Hope State Park and Zaleski State Forest in Ohio as part of the Parks on the Air (POTA; link) program.

Eric had spent most of Saturday morning helping with Athens County Amateur Radio support of the inaugural "Run Baileys" fifteen-mile trail run. Finishing earlier than he had expected to, and the weather being nice, Eric decided it was a good day to do some POTA activations and first visited Waterloo Wildlife Area (link) and then proceeded to Lake Hope State Park for the two-fer activation of Lake Hope State Park (K-1968) and Zaleski State Forest (K-5455) at Keeton Cemetery within Lake Hope State Park. Eric was joined by his wife, Vickie, and their two small dogs, Mindy and Theo.

Eric, Vickie, and the dogs arrived at Keeton Cemetery at about 1900 UTC. While Vickie and Mindy-dog explored area, and while Theo-dog slept, Eric quickly set up his 28½' wire vertical on his Jackite 31' telescoping fiberglass mast and drive-on mount and set up his KX3 inside his car. Eric was on the air at 1906 UTC. 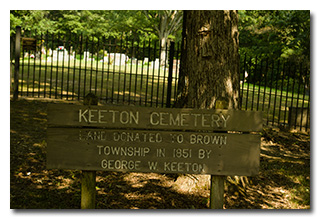 Eric had been cautioned by his friend Mike, K8RAT, that HF band conditions were pretty bad, but Eric had found the earlier activation of of Waterloo Wildlife Area (link) to not be too difficult, and didn't think this two-fer activation would be difficult, either.

Eric began operations by checking POTA Spots for P2P QSO opportunities and at 1910 UTC succeeded in making a P2P QSO on 20m with K0BWR who was activating Chase State Fishing Lake (K-5455) in Kansas.

Finding a frequency on 30m, Eric's first QSO there came at 1916 UTC with NI0R in Missouri. QSOs came steadily, if not quickly, and Eric had completed his seventh QSO on 30m by 1922 UTC. This run included a second P2P QSO with K0BWR who was still activating Chase State Fishing Lake (K-5455) in Kansas.

After Eric's seventh QSO on 30m, another station came on frequency and began to call "CQ DX", so Eric thought it to be a good time to check POTA Spots for additional P2P QSO opportunities and at 1928 UTC he succeeded in making a P2P QSO on 15m with KP4RK who was activating Centro Vacacional Monte del Estado State Park (K-0444) in Puerto Rico.

Pausing again to hunt for P2P QSOs, at 1938 UTC Eric made a P2P QSO on 40m with W8EU who was activating Cape Lookout National Seashore (K-0683) in North Carolina.

Returning to 40m to run a frequency, at 1944 UTC Eric made one additional P2P QSO, this time with KG8HZ who was activating Hayes State Park (K-1504) in Michigan.

In all, Eric made thirteen QSOs, including five P2P QSOs. All of Eric's QSOs were CW and were made at the 5-watt level.