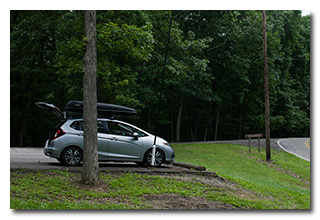 Eric had actually intended to perform an activation of Waterloo Wildlife Area (K-8633) but while enroute, was notified via text that his friend Carl, N8VZ, was already at Waterloo performing a POTA activation using FT8. Not wanting to interfere with Carl—and not wanting his own operation to be interfered with by Carl—Eric decided to drive the short distance farther and instead perform a two-fer activation of Lake Hope State Park and Zaleski State Park.

Eric, Vickie, and the dogs arrived at Keeton Cemetery at about 1845 UTC. While Vickie walked with Mindy and Theo, Eric quickly set up his 28½' wire vertical on his Jackite 31' telescoping fiberglass mast and drive-on mount and set up his KX3 inside his car. Eric was on the air at 1855 UTC.

Just as at his activation at the same location the day prior, Eric found he had only very poor cell-signal at Keeton Cemetery. He was initially able to load the POTA Spots website but was unable to self-spot himself. Eric was able to identify possible park-to-park (P2P) QSO opportunities on the POTA Spots website and at 1856 UTC made a P2P QSO on 20m with NK4DX who was activating Biscayne Bay National Park (K-0007) in Florida.

Finding his own frequency on 40m, Eric texted his friends K8RAT and K4SWL for spotting-support and in just about thirteen minutes he made ten more QSOs. Near the end of this short run, Eric heard what he thought was a distant thunder-crash and resolved to make this a short activation. No thunderstorm developed, and Eric later learned from K8RAT, who had been watching the lightning-map, that the map hadn't shown a lightning strike anywhere near the state park and state forest during Eric's operation.

In all, Eric made eleven QSOs, including one P2P QSO, in just about twenty minutes. All of Eric's QSOs were CW and were made at the 5-watt level.