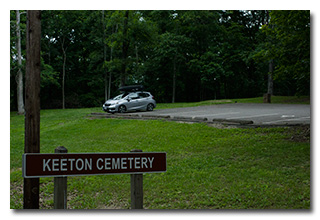 On Friday, June 18, 2021, one member of the Southeast Ohio Radio Adventure Team performed a successful two-fer activation of Lake Hope State Park and Zaleski State Forest in Ohio as part of the Parks on the Air (POTA; link) program. Eric McFadden, WD8RIF, performed the impromptu two-fer activation on a gray morning with an approaching thunderstorm at the Keeton Cemetery within both Lake Hope State Park and Zaleski State Forest. Eric was accompanied by his daughter Kate, KD8KNB; Kate's dog Bo; and the two small dogs Theo and Mindy.

Eric, Kate, and the dogs arrived at Keeton Cemetery at about 1530 UTC. While Kate walked Bo, and while Theo and Mindy explored, Eric quickly set up his 28½' wire vertical on his Jackite 31' telescoping fiberglass mast and drive-on mount and, because of the threat of rain, set up his KX3 inside his car. Eric was on the air at 1542 UTC.

Despite some pretty heavy lightning crashes on the band, Eric began operations on 40m and managed to validate his activation by making ten QSOs in about twenty-three minutes. Most of the stations Eric worked on 40m were fairly weak and most indicated his signal was weak, too.

Before tearing down his station, Eric happened to glance at his phone and saw that the POTA Spots website had, at some point in time, loaded and Eric made a P2P QSO on 20m with KW5CW who was activating Eisenhower State Park (K-3005) in Texas.

The sound of distant thunder convinced Eric that he made enough QSOs for this activation and quickly tore down his station. Eric had planned to perform an activation of Waterloo Wildlife Area (K-8633) before returning home but, because of the thunder, decided against performing another activation.

In all, Eric made eleven QSOs, including one P2P QSO, in just under half an hour. All of Eric's QSOs were CW and were made at the 5-watt level.