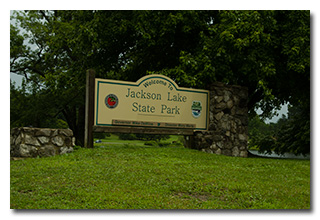 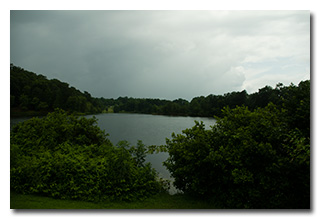 Eric arrived at the Jackson Lake State Park fishing pier at about 1745 UTC and could hear local thunder while he deployed his 28½' wire vertical on his Jackite 31' telescoping fiberglass mast and drive-on mount. Because of the very real possibility of rain and thunderstorms, Eric set up his KX3 inside his car. Eric was on the air at 1754 UTC.

Before commencing operations, Eric asked his friend K8RAT via text to check the lightning map and tell him where the lightning was relative to Jackson Lake. When Mike told him the lightning was southeast of Jackson Lake, over a portion of the Wayne National Forest—Eric's next destination—Eric thought it was reasonably safe to begin operations so long as he kept watch for closer strikes. 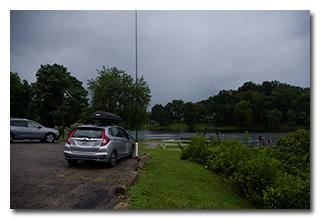 Eric began operations by finding a frequency to run and by 1814 UTC he had made eleven QSOs.

Pausing to check POTA Spots for P2P QSO opportunities, at 1818 UTC, Eric made a P2P QSO on 30m with KK9JEF who was activating Santa Fe Prairie State Nature Preserve (K-7839) in Illinois.

Finding his own frequency on 30m, Eric made five QSOs by 1829 UTC. This run included a P2P QSO with ND9M who was activating Greenbrier State Park (K-1575) in Maryland. It was during this period that the skies opened in a real gully-washer of a downpour, the noise of the rain being so loud that Eric had trouble hearing the CW in his headphones. There being no evidence of lightning, however, Eric continued to operate as well as he could.

The rain having stopped, and because his aggressive itinerary didn't allow for much time at any of the parks, Eric tore down his station in order to proceed to his next location.

In all, Eric made twenty QSOs, including five P2P QSOs. All of Eric's QSOs were CW and were made at the 5-watt level.