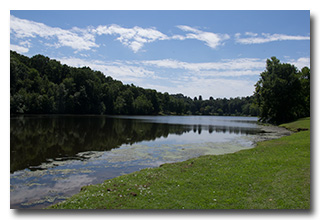 On Saturday, August 10, 2019, one member of the Southeast Ohio Radio Adventure Team performed a successful activation of Jackson Lake State Park in Ohio as part of the Parks on the Air (POTA; link) program. Eric McFadden, WD8RIF, was accompanied to the park by his wife Vickie, KC8MAJ, and their two dogs, Theo and Mindy.

Eric, Vickie, and the dogs arrived at the Jackson Lake State Park picnic and swimming area at about 1645 UTC and after a bit of exploration, Eric decided to set up his station in the more rustic of the two picnic shelters at the site. He deployed his 28½' wire vertical on his 33' MFJ-1910 telescoping fiberglass mast and set up his KX3 on one of the picnic tables. Eric was on the air at 1710 UTC.

In order to give his good friend and fellow SEORAT-member K8RAT, Mike, a QSO, Eric started operations on 80m and a QSO was made immediately at 1710 UTC. 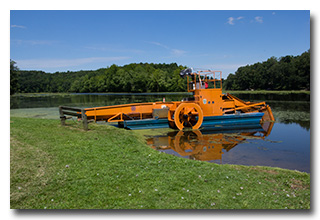 Finally, Eric returned to 40m to give his good friend K4SWL in western North Carolina a QSO.

In all, Eric made fifteen QSOs on four bands. All of Eric's QSOs were CW and were made at the 5-watt level. Vickie didn't operate but did perform all the RATpedition navigation and managed the dogs during the operation.

Eric and Vickie had hoped that both the dogs would have a good time exploring the park and, indeed, little Mindy did have great time—and even jumped into the lake for a swim. Unfortunately, mere minutes after the arrival at the park, shots were heard from a nearby shooting range and little Theo, who is terrified of gunshots, remained close to the humans and the relative safety of the picnic shelter for nearly the entire operation.