What began as a shallow feeder lake for the Miami & Erie Canal in the 19th century, later turned into a popular resort park after the canal era ended in Ohio. Today, Indian Lake offers a variety of on-the-water recreational options including boating, fishing, jet skiing, and swimming. Off the lake, visitors can enjoy camping, picnicking, and winter activities such as ice fishing and snowmobiling. 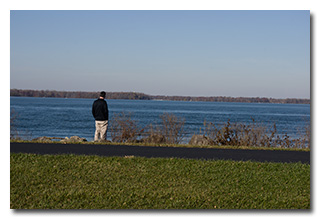 On Saturday, November 7, 2020, two members of the Southeast Ohio Radio Adventure Team performed a successful activation of Indian Lake State Park in Ohio as part of the Parks on the Air (POTA; link) program.

Eric McFadden, WD8RIF, and Miles McFadden, KD8KNC, performed the activation of Indian Lake State Park along the South Bank at Lakeview while enjoying the sunshine and 70° temperature of the unseasonably warm early November day.

The pair arrived at the Lakeview at about 1940 UTC and drove south along the South Bank to find a mostly-empty parking area. Parking the car in a corner space nearest the lake, they quickly deployed Eric's 28½' wire antenna on his 31' Jackite telescoping fiberglass mast and drive-on base. Because of the very pleasant weather, Eric set up his station on a folding camp-chair adjacent to the mast. Eric was on the air at 1953 UTC. 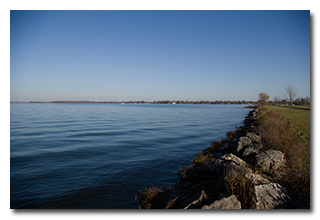 As expected, Eric had excellent cell-signal and was able to self-spot himself on the POTA Spots website as well as to look for park-to-park (P2P) QSO opportunities.

Eric began operations on 80m and his only QSO there came at 2001 UTC with his good friend K8RAT in Ohio.

Checking POTA Spots for possible P2P opportunities, Eric switched to 40m for a P2P QSO at 2004 UTC with K0BWR who was performing an activation of Webster State Park (K-2354) in Kansas.

Finding his own frequency on 40m, Eric began to call "CQ POTA" and at 2008 UTC had a QSO with AF4YR in Virginia. QSOs came steadily, with Eric's seventh QSO in the run coming at 2015 UTC with W8NWG in Illinois.

Again checking POTA Spots for P2P opportunities, Eric switched to 30m for a P2P QSO at 2019 UTC with N0EVH who was performing an activation of Melvern River State Fishing Lake (K-7405) in Kansas. 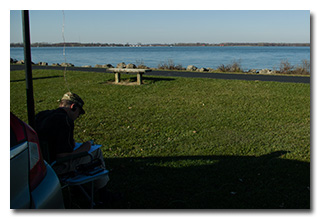 Upon returning to 40m, Eric found that the SKCC Weekend Sprintathon had started, so he found his own frequency on 30m. Eric's first QSO on 30m resulting from calls of "CQ POTA" came at 2023 UTC with N3XLS in Pennsylvania. QSOs came quickly, with Eric's eleventh QSO in this run coming at 2035 UTC with NZ7R in New Mexico. This run included a second P2P QSO with K0BWR who was at this point performing an activation of Nicodemus National Historic Site (K-0851) in Kansas.

In all, Eric made twenty-one QSOs, including three P2P QSOs. All of Eric's QSOs were CW and were made at the 5-watt level. Miles did not operate but helped with navigation, set-up and tear-down, and photography.