The limestone and shale bedrock of the Hueston Woods region provides evidence of the ancient shallow sea that once covered Ohio. Fossilized remnants of ancient marine animals are so abundant that the park attracts collectors year-round. Fossil hunting is just the beginning of the outdoor adventures found at this lodge park.

The outdoor options are endless and include golfing, fishing, boating, hiking, horseback riding, and picnicking. Other highlights include an outstanding nature center and a charming covered bridge.

Hueston Woods is a tiny remnant of the beech-maple forest that once stretched in a broad band from southwestern Ohio to its northeastern corner. This forest type is dominated by the ghostly gray trunks of beech trees along with varying proportions of sugar maple, red and white oaks, and white ash. The quantity and variety of species vary according to the wetness and slope of the ground and other environmental factors.

In Hueston Woods, beech trees form nearly 44 percent of the canopy, sugar maples make up 28 percent and white ashes 19 percent. During the spring, the forest floor is blanketed with a luxuriant display of wildflowers including dutchman's breeches, squirrel corn, large-flowered and sessile trilliums, may-apple, bloodroot and several species of violets and buttercups. 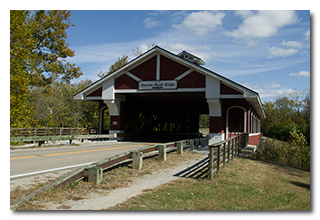 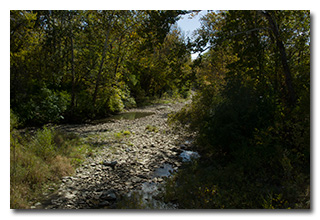 Following the activation of Whitewater Memorial State Park (link) earlier in the day, Eric and Miles continued their drive east into southwestern Ohio and Hueston Woods State Park. Eric's plan had been to perform his operation at the Sugar House Fishing Pier but upon arriving, he discovered this location to be inaccessible—or he had mapped to it incorrectly. Back-tracking, he and Miles found their way back to the picnic area adjacent to the lovely Hueston Woods Covered Bridge, arriving about 1850 UTC. Despite the cool temperature and gusty wind, Eric chose to operate outside and chose a picnic table under a nice tree. He and Miles deployed the 28½' wire vertical on a Jackite 31' telescoping fiberglass mast which Eric leaned into the tree. Setting up his KX3 on the picnic table, Eric was on the air at 1907 UTC.

Eric was a bit surprised to find he had very good cell-signal at this location, and he was able to use POTA Spots (link) to identify possible Park-to-Park (P2P) QSOs and, if necessary, to spot himself. 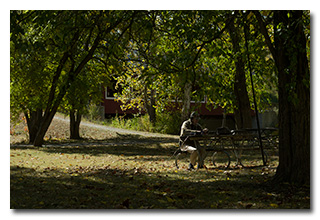 Eric began his operation on 20m, finding himself a clear frequency and calling CQ. After only a few calls, Eric was pleased to see that he had been automatically spotted on POTA Spots. Eric's first QSO came at 1911 UTC with KJ7DT in Idaho. QSOs came quickly, with Eric's fifteenth QSO coming at 1927 UTC with N1PRR in Arizona. This run included QSOs with operators located in Idaho, Missouri, North Carolina, New Jersey, Ohio, Georgia (2), Minnesota, Maryland, New Brunswick, Arizona (2), New York, Wisconsin, and Ontario.

Switching on 30m, Eric found himself a frequency to run and began calling CQ. As before, he was quickly auto-spotted on POTA Spots. Eric's first QSO in this run came at 1931 UTC with WB4WTN in Georgia. This was followed at 1932 UTC by a QSO with Eric's friend K8RAT in Ohio and at 1933 UTC by a QSO with K5KHK in New York. At this point, as the band was changing, it became apparent to Eric that he was no longer the only user of the frequency, so he moved up a bit to find a clear frequency, and continued his run there. The first QSO on the new frequency came at 1936 UTC with W8EWH in Michigan. QSOs on the new frequency came steadily, with Eric's eighth QSO on 30m coming at 1940 UTC with KF9R in Indiana. This run included QSOs with operators located in Georgia, Ohio, New York, Michigan, Tennessee, Illinois, Pennsylvania, and Indiana. 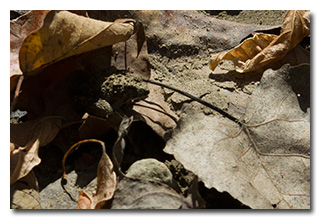 Eric finished his activation with one last look at POTA Spots for P2P QSO opportunities and at 1947 UTC he completed a P2P QSO on 20m with W2NR who was simultaneously activating Hot Springs National Park (K-0036) and Gulpha Gorge National Recreation Area (K-7441) in Arkansas.

In all, Eric logged twenty-five QSOs, including two P2P QSOs. All of Eric's QSOs were CW and were made with 5w output.