Great Seal State Park is located just north of the town of Chillicothe and dedicated to the wilderness spirit of Ohio. The history of the Shawnee nation and Ohio's early statehood is centered in these rugged hills. Challenging trails through the 1,862-acre park take visitors to scenic vistas of distant ridgetops and the Scioto Valley below. These very hills are depicted on the Great Seal of the State of Ohio, from which the park gets its name. First depicted in 1803, the seal was often reconfigured until the present image was sanctioned by the Ohio General Assemble in 1967 and modified in 1996. In 1803, the law prescribed the sheaf of wheat to represent Ohio's agricultural roots and the bundle of seventeen arrows to symbolize Ohio's place as the seventeenth state in the Union. The range of hills seen in the background of the seal, include Mount Logan, as viewed from Thomas Worthington's estate, Adena, now a state memorial. 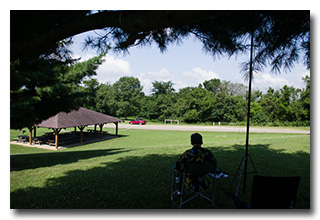 Eric and Miles arrived at the Scenic Overlook camping area at Great Seal State Park at about 1345 UTC and, after a break to visit the facilities and after spending a few minutes exploring the options presented by the location, they chose to set up Eric's station in the shade of a large tree at the top of the hill in the center of the area. Eric and Miles quickly deployed the 28½' end-fed vertical supported on an MFJ-1910 33' fiberglass mast and set up the KX3 on Eric's folding camping chair. Eric was on the air by 1419 UTC.

Eric began operations on 80m for a QSO at 1422 UTC with his friend and fellow SEORAT-member, K8RAT. Not expecting much additional activity on 80m at that time of day, Eric switched to 40m to continue operations.

Almost as soon as the first spot appeared, QSOs began filling up the log. Eric's first QSO on 40m came at 1429 UTC with N2ESE, a station Eric has come to expect at his POTA activations. Half an hour later Eric made his 19th QSO on 40m with W2LJ.

Switching to 20m, Eric's first QSO there came at 1502 UTC with W6LEN. Given his experiences at other recent POTA activations, Eric hadn't expected much activity on 20m but subsequent QSOs came so quickly Eric was even able to log them in real time—he could only take notes on his CW copy-paper and hope he could read his writing later. In the unexpected rush of activity, Eric made sixteen QSOs in only fifteen minutes, with his 36th and final QSO coming at 1517 UTC with AA2VG.

Eric and Miles tore down the station, packed the car, and began the very short drive to the second of the five parks, Hopewell Culture National Historical Park, K-0737.

All Eric's QSOs were CW and were made at the 5-watt level. Miles didn't operate but did much of the expedition photography and helped with set-up and tear-down, spotting, and navigation.