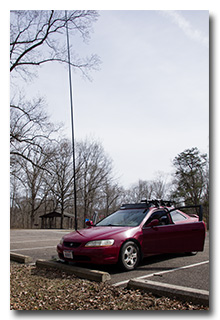 The pair arrived at Forked Run State Park at about 1745 UTC and spent a few minutes exploring the area near the park's main entrance before deciding to set up the station near one of the picnic shelters. Because of the gusty wind, Eric chose to operate inside the car. Eric and Miles quickly strapped Eric's tripod to the front wheel of the car, extended the 33' MFJ-1910 fiberglass mast, and deployed 28½' end-fed wire and three counterpoise wires. Eric hung his KX3 on the car's glovebox door and was on the air by 1802 UTC.

Eric began operations on 40m, calling CQ on 7.032 MHz while using his KX3's dual watch feature to monitor 7.034 MHz for N2CX who was performing a POTA activation of Delaware National and Scenic River, K-0684, in Pennsylvania. Eric's first QSO was with VE3LDT at 1808 UTC and was followed quickly by a QSO with WA9LEY at 1810 UTC. Eric then heard N2CX come up 7.034 MHz and he made a Park-to-Park QSO with N2CX at 1813 UTC. Back on 7.032 MHz, Eric made two more QSOs before he began tuning around to look for stations participating in the Oklahoma, Idaho, and Wisconson QSO Parties. Eric made one OK QSO Party contact before switching to 20m. No QSOs resulted from calling CQ on 14.063 MHz but Eric made an OK QSO Party contact and an SKCC Weekend Sprint contact before switching to 30m, where one contact resulted from calling CQ. Returning to 20m, Eric made one more SKCC WES QSO and a QSO with LZ2HR in Bulgaria. In all, Eric made eleven contacts in just over an hour.

Eric also submitted his log to the World Wide Flora and Fauna in Amateur Radio (WWFF; link) program although his eleven QSOs were not sufficient to achieve a valid activation within the program which requires 44 QSOs be made. However, the WWFF program allows these 44 QSOs be made over any number of visits so a valid activation within WWFF is still possible if subsequent visits to the park are made.