Located in southwest Ohio, the 4,870-acre East Fork State Park is one of the largest state parks in Ohio. The park offers diverse recreational and natural history opportunities only 25 miles from Cincinnati. Rolling hills, winding rivers and a large lake provides a beautiful backdrop for for a wonderful getaway. 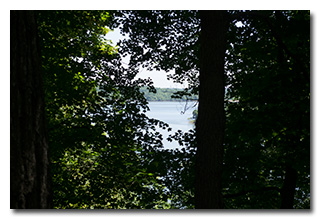 On Friday, July 12, 2019, two members of the Southeast Ohio Radio Adventure Team performed a successful activation of East Fork State Park in Ohio as part of the Parks on the Air (POTA; link) program. Eric McFadden, WD8RIF, and Miles McFadden, KD8KNC, visited the park following a visit to Cincinnati's Lunken Field to see the B-29 Superfortress Fifi. Eric and Miles were accompanied by Vickie McFadden, KC8MAJ.

The trio arrived at East Fork State Park at about 1630 UTC, about an hour earlier than had been planned. After some scouting, Eric chose to set up at the Turkey Ridge picnic area, a wooded area with substantial height and a nice view of the lake far below. After a quick picnic lunch, Eric and Miles quickly deployed the 28½' end-fed vertical supported on an MFJ-1910 33' fiberglass mast and set up the KX3 on Eric's folding camping chair. Eric was on the air by 1650 UTC.

Eric began operations on 40m and his first QSO came at 1652 UTC with NG2J. QSOs came steadily, if not quickly, with Eric's tenth QSO on 40m coming at 1715 UTC with AA2VG.

Eric switched to 80m and made one QSO there with his good friend K8RAT at 1719 UTC.

Eric had found all four bands to be eerily quiet, so quiet he initially wondered if his KX3 receiver had gone deaf. The signals themselves, when they came, were almost all well above the almost-inaudible noise floor and if Eric could hear the station, he could copy the CW regardless of actual signal strength. Eric did experience some rapid QSB, particularly on 20m and was disappointed to be unable to complete a QSO with AA5UZ, who started out 599 but had faded completely away by the time his turn in the QSO had come around. Fortunately, Eric and AA5UZ were able to complete a QSO on 30m about ten minutes later.

Miles was able to report to Eric that the POTA Spots website did eventually skim the Reverse Beacon Network to successfully spot Eric at least once. Eric had hoped that the initial long CQs at the beginning of the operation would have been enough to place his first spot but it seems a cellphone is still required to be assured of a timely spot.

An unexpected surprise came during station tear-down: P-51 Mustang Gunfighter overflew the Turkey Ridge picnic shelter while giving some lucky and well-heeled passenger the ride of his life out of Lunken Field. (A 30-minute ride in Gunfighter would cost $2,000 and a 50-minute ride would cost a cool $3,100.)

East Fork State Park appeared to be a lovely park and is well worth another visit.

All Eric's QSOs were CW and were made at the 5-watt level. Miles didn't operate but did much of the expedition photography, helped with set-up and tear-down, helped with spotting, and helped with navigation.