Located in east central Ohio the wooded hills and scenic valleys surrounding Dillon State Park offer a picturesque setting for outdoor adventure. Whether boating the quiet coves and inlets of the lake or hiking the forest trails, you'll have an outstanding recreational experience at this 2,285-acre park. 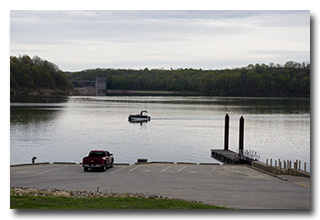 One member of the Southeast Ohio Radio Adventure Team succeeded in performing a valid activation of Dillon State Park, K-1947, in Ohio as part of the the Parks on the Air (POTA; link) program. Eric McFadden, WD8RIF, visited Dillon State Park on a cool, overcast spring day.

Eric arrived at Dillon State Park at about 1845 UTC and drove to the marina, where he had hoped to find a nice place to set up his station. At the marina, Eric found several picnic tables located in an area well-suited for deploying his mast. Eric quickly erected his MFJ-1910 33' fiberglass mast and deployed an under-test 58' end fed wire arranged as a sloper running from a balun on his KX3 up to the top of the mast. He deployed his 28½' wire as a radial directly under the sloper and one 17' wire as a radial directly opposite the first radial. Setting up his KX3 on a picnic table, Eric quickly determined that the KXAT3 internal ATU within the KX3 could easily find a good match for this antenna on 20m, 30m, 40m, 60m, and 80m. Eric was on the air by 1908 UTC.

Because he had hoped the 58' sloper would act as a low-band NVIS antenna, Eric started operations on 80m in the hopes that a QSO with his friend and POTA-Hunter K8RAT could be made. Unfortunately, while Eric could clearly hear K8RAT, his friend couldn't hear him. Moving to 60m for the same test, a valid QSO with K8RAT was made at 1914 UTC.

At this point, the frustrations began. Starting on 20m, Eric began calling CQ and after about fifteen minutes had a QSO with AA5UZ at 1927 UTC. The next QSO wouldn't be made until 2004 UTC, and this QSO was on 40m with N4CD who was activating K-1498, Fort Michilimackinac State Park in Michigan. This meant the first three QSOs took some fifty minutes to make. Sometime during the string of unanswered CQs that followed the QSO with N4CD, Eric deployed his N2CX-inspired 20/30/40m vertical to see if this antenna would prove to be more productive. Even with several band-changes and with two antennas to choose from, it took Eric another fifty minutes to make the next four QSOs, with the first two of these being made on 20m, the third being made on 40m, and the fourth being made on 60m. (The 60m QSO was with VE3LDT, whom Eric had worked on 60m at the recent activation at A.W. Marion State Park.)

The final three QSOs took well over an hour to make. All were made on 20m and all were made by answering someone else's CQ. First came a QSO with XE1XR in Mexico at 2112 UTC. Then, over an hour later at 2211 UTC, came a short ragchew with K1NKY in Washington State. Finally, the tenth QSO was made at 2227 UTC with CS7AMH in Portugal.

This activation was far more difficult to complete than any of the 183 National Parks on the Air (NPOTA) activations Eric performed in 2016 and was far more difficult than any of the previous twenty-three POTA activations Eric has performed. Why did it take over three hours to make ten QSOs this time? The answer to this question remains a riddle. With either antenna, the noise floor on all the bands was very low; indeed, on some bands the noise floor was so low it wasn't registering at all on the KX3's s-meter. Despite the low noise floor, the KX3's receiver was known to be working properly because crashes from distant thunderstorms could be heard even on 20m. In addition, on 40m between 1900 and 2000 UTC, dozens of very strong high-speed CW signals could be heard as CW Ops (link) members participated in the every-Wednesday "CWT" event and after 2000 UTC, using the tri-band vertical, strong European DX could be heard. (Had Eric known that non-members can participate in CWT by sending their name and state, he would have tried to answer some CWT CQs.) The KX3's transmitter and both antennas were working well because the Reverse Beacon Network reported Eric nearly 100 times, on all the bands he tried — see a screen-cap.

Dillon State Park itself was pretty and is worth another visit. Perhaps, Eric will attempt another POTA activation there sometime.