After a successful and easy operation at Alum Creek State Park, the next stop was Delaware State Park, K-1946, where Eric and Miles were to be met by friend and fellow Radio Adventure Team member Mike Hansgen, K8RAT. 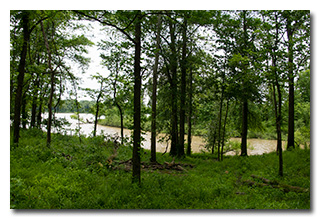 Eric and Miles arrived at Delaware State Park at about 1545 UTC to find Mike already there waiting for them. Eric had planned to set up at the Elmwood Grove area of the state park but Mike had already been there and had discovered that cell-signal was unavailable there. The ability to self-spot during POTA activations being important, the trio decided to explore the park for an alternative location and quickly found the Sweet Gum picnic area. Giving Mike the easy-access picnic table, Eric quickly deployed his MFJ-1910 33' fiberglass mast to support his 28½' end-fed wire vertical with three 17' radials and he set up his KX3 on his folding camping chair's swing-up table. Eric was on the air by 1618 UTC. Miles helped Mike deploy his station, an Elecraft KX3 and an NC2X-inspired 40/30/20m wire vertical supported by a 20' Black Widow telescoping fiberglass pole and Mike was on the air a few minutes after Eric was.

Band conditions on 40, 30, and 20m remained good and in just about forty-five minutes Eric easily made fifteen QSOs, including a park-to-park QSO with Mike and a POTA-to-SOTA QSO.

Starting on 40m, Eric began calling "CQ POTA" and his first QSO came at 1621 UTC with VE3ZN. QSOs on 40m came quickly after that with ten minutes bringing seven QSOs, with Eric's final QSO on 40m coming at 1631 UTC with W0ZAP.

Switching to 30m, Eric's first QSO there came at 1652 UTC with NE4TN. A minute later, Eric worked W0ZAP a second time on a second band.

Eric returned to 40m to make a park-to-park QSO with Mike at 1703 UTC and in the following minute made a POTA-to-SOTA QSO with NK8Q who was performing a Summits on the Air (SOTA) activation of Tower Hill, W3/PW-012, in Pennsylvania.

In an effort to not steal Eric's CW QSOs, Mike started operations using SSB on 40m while Eric was still operating CW on 40m. Mike's 40m SSB signal was audible in Eric's receiver but it wasn't bad considering that Mike was operating on the same band. Once Eric switched to 20m, Mike's SSB 40m signal was no longer audible in Eric's receiver but, strangely, Mike could hear Eric's 20m CW signal while he was still doing 40m SSB.

While Eric tore down his station, Miles helped Mike tear down and pack Mike's station. Mike would lead Eric and Miles to the next stop, Mt. Gilead State Park, a small park located very close to Mike's home QTH.

The ability to self-spot did turn out to be important during this operation. Being a bit of a luddite, Eric usually can't self-spot and relies on others to spot him a first time on the POTA Spots website (link). Thereafter, when Eric gets to a new park, he makes a pair of long CQ calls that include the park designation, e.g., "CQ CQ CQ DE WD8RIF WD8RIF K1946 K". The POTA Spots website is designed to scrape the Reverse Beacon Network (link) and automagically spot POTA CW activators, associating the correct park designator with the spot. However, while Eric was activating at Delaware State Park (and later, at Mt. Gilead State Park) Eric's spots at POTA Spots kept reverting to show him at Alum Creek State Park and Mike had to keep re-spotting Eric so that the spots showed the correct park.