The 4,220-acre wildlife area is in central Ohio, four miles south of Mount Sterling on State Route 207 and adjacent to the 1,277-acre Deer Creek Lake. 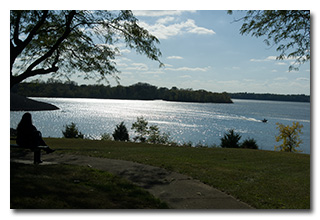 On Sunday, October 2, 2022, two members of the Southeast Ohio Radio Adventure Team performed successful simultaneous activations of Deer Creek State Park and Deer Creek Wildlife Area in Ohio as part of the Parks on the Air (POTA; link) program. Eric McFadden, WD8RIF, and Miles McFadden, KD8KNC, visited the park after a planned flight on the EAA's historic Ford Tri-Motor was canceled due to excessively strong winds from the remnants of Hurricane Ian. Eric and Miles were joined by Eric's wife and Miles's mother, Vickie, KC8MAJ.

Vickie, Miles, and Eric had really been looking forward to the flight on the 1929 Ford Tri-Motor (info) and had stopped for lunch in Chillicothe on their way to the airport in Xenia for the flight when the phone call came notifying them the flight had been canceled due to the excessively strong winds. Disappointed, the trio spent some time in Chillicothe and then pointed the car north to Deer Creek State Park for the two-fer activation that had been planned to take place on the way home from Xenia after the Tri-Motor flight.

The trio arrived at the dam overlook at Deer Creek State Park about 1930 UTC. After exploring the options, Eric selected a park bench as his operating location, with Eric's Jackite 31' telescoping fiberglass mast to be strapped to the back of the bench. In an unusual turn of events, Eric and Miles really struggled to deploy the 28½' end-fed vertical on the Jackite mast; the mast collapsed in upon itself at least three times before success was achieved—was it the gusty wind that caused the mast to collapse? Perhaps. After the mast was extended and the securely strapped to the bench, Eric set up the KX3 on the bench. Eric was on the air at 1955 UTC.

Eric had very good cell-signal at this location, so he would be able to access POTA Spots (link) to spot himself and to use POTA Spots to identify possible Park-to-Park (P2P) QSOs.

Eric started operations by checking POTA Spots for P2P QSO opportunities and at 1956 UTC he was very pleased to make a QSO on 30m with KJ4R who was performing a three-fer POTA activation of Poinsett State Park (K-2910), Palmetto State Trail (K-9203), and Manchester State Forest (K-5486) in South Carolina. Because KJ4R was performing a three-fer, this QSO counted as three QSOs for Eric and was logged as such.

Finding himself a frequency to run on 40m, Eric began to call CQ and was happy to see that he was automatically spotted on POTA Spots based on the announcement of his activation he had made earlier and reports from the Reverse Beacon Network (RBN, link). Eric's first QSO on 40m came at 2001 UTC with K4NAN in Tennessee. QSOs came quickly, with Eric's fifteenth QSO on 40m coming at 2019 UTC with K9ABR in Illinois. This run included QSOs with operators located in Tennessee (2), Illinois (3), Wisconsin, Maryland, Pennsylvania (2), Alabama, North Carolina, Ohio, Indiana, Michigan, and Virginia.

After 40m seemed to run dry, Eric again checked POTA Spots for P2P QSO opportunities, but no additional P2P QSOs were made. 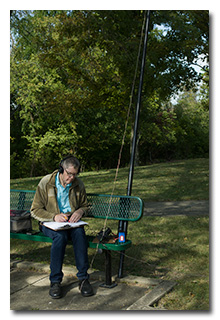 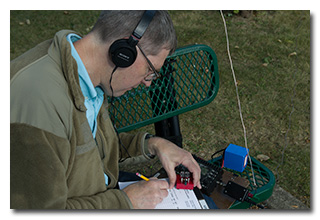 In all, Eric logged eighteen QSOs. All his QSOs were CW and were made at the 5-watt level. Miles didn't operate but did much of the activation photography and helped with set-up and tear-down.

After tearing down the station, Eric and Miles spent a few minutes exploring the dam overlook area and doing photography. 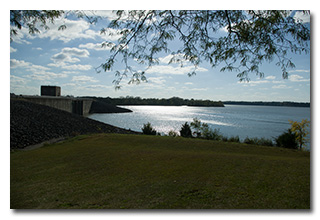 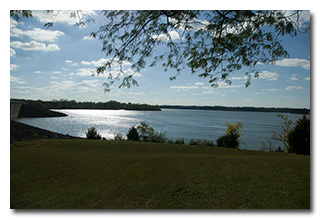 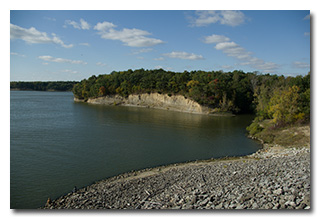 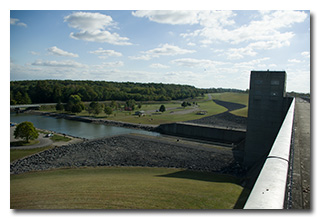 The back side of the dam 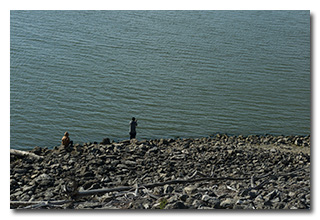