As one of Ohio's resort parks, Burr Oak State Park blends modern convenience with Ohio's wilderness spirit. Miles of forested ridges and hollows can be found here. The park offers a rustic full-service lodge with family suites and a cozy campground with easy access to the lake. A substantial trail system ranges from easy to difficult with portions intersecting the statewide Buckeye Trail. 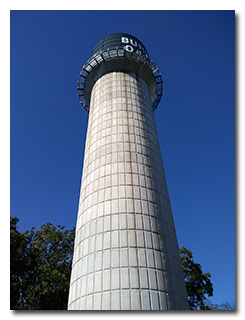 On Saturday, September 19, 2020, one member of the Southeast Ohio Radio Adventure Team performed a successful activation of Burr Oak State Park as part of the Parks on the Air (POTA; link) program while participating in the New England QRP Club's annual QRP Afield QRP field contest. Eric McFadden, WD8RIF, was accompanied by his wife Vickie, his daughter Kate, and their three dogs, Bo, Theo, and Mindy.

Eric, Vickie, Kate, and the dogs arrived at the Burr Oak State Park water tower at about 1900 UTC and found the area to be unoccupied. Eric deployed his 28½' wire vertical on his Jackite 31' telescoping fiberglass mast which he supported on the drive-on mount. Because the weather was nice, Eric chose to operate outside the car, and he set up his KX3 on his folding camp-chair which he placed adjacent to his mast. Eric was on the air at 1915 UTC.

Eric's plans for this operation were to concentrate on making QRP Afield QSOs, although he did self-spot himself on the POTA Spots website so Hunters could find him.

In all, Eric made eleven QSOs, which included four QRP Afield-eligible QSOs. All of Eric's QSOs were CW and were made at the 5-watt level.