The North Country National Scenic Trail is the longest in the National Trails System, stretching 4,800 miles across eight states from North Dakota to Vermont, traversing forests and farmlands, remote terrain and nearby communities. Whether you’re looking to day-hike a few miles or plan a longer overnight backpacking trip, a multitude of diverse landscapes and hiking opportunities are waiting for you.

Eric McFadden, WD8RIF, and Jeff Slattery, N8SUZ, had volunteered to serve as communicators for the annual Bobcat Trail Marathon and Half-Marathon trail-run. This event is run on trails within Burr Oak State Park, including the Buckeye Trail which is coincident with the North Country National Scenic Trail. Both operators were assigned locations that were within Burr Oak State Park and within 100' of the North Country National Scenic Trail.

The weather was cold (43°) and would only get colder, it was raining and the rain would turn to sleet and snow, and it was windy—not an ideal day for a trail-run, for an outdoor public-service communications event, or for POTA activations. 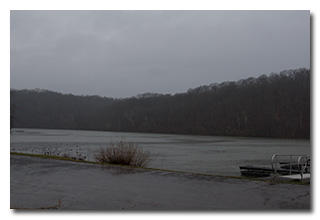 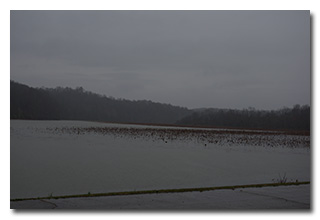 Eric and Miles arrived at Dock 3 prior to their 9am scheduled arrival time, set up their EZ-Up tent, deployed a 2m vertical on 16' of military-mast sections and a custom trailer-hitch mount designed by Miles, and deployed Eric's ICOM IC-2100H field station and a small propane heater in the tent. At this time, Eric also deployed his 28½' wire vertical on his 31' Jackite fiberglass telescoping mast supported on a drive-on base. Shortly after Eric and Miles completed their set-up, the aid-station team arrived and deployed their own pop-up tent, a pair of tables, and a larger propane heater.

Prior to leaving his home, because Eric knew he would have no cell signal at Dock 3, and hoping he would be able to squeeze in an activation, he had announced his POTA activation on POTA Spots (link) so that he would be automatically spotted on POTA Spots when he began his CW operation.

After set-up was complete, and with the first runners not due for a significant period of time, Eric realized he had just enough time for a quick activation, so he he set up his Elecraft KX3 in his son's Subaru Impreza and was on the air at 1402 UTC. 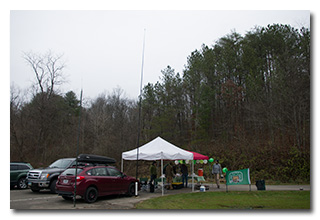 The aid station. The mast behind the Impreza
supports the 2m antenna used for marathon
communications. The mast at the Impreza's
front wheel supports Eric's 28½' wire vertical. 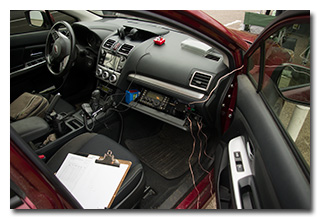 Eric's station inside the Impreza.

Eric began his operation on 20m by finding himself a frequency to run and beginning to call CQ. He was quickly auto-spotted and his first QSO came at 1403 UTC with WI0S in Minnesota. QSOs came very quickly, with Eric's tenth QSO (for a valid activation) coming in only nine minutes and with his fourteenth QSO coming at 1416 UTC with KG5DKG in Mississippi. This run included QSOs with stations located in Russia, Finland, France, Italy, and the U.S. states of Minnesota (2), Georgia, Florida (2), California, Texas, New Mexico, Massachusetts, and Mississippi.

The first few runners having passed the aid station while Miles handled the communications-duties, Eric went temporarily QRT in his POTA activation in order to do his job as marathon-communicator.

After the first crush of runners was past, and about when the cold was beginning to take its toll, Eric returned to the car to hide from the cold and to make a few additional QSOs. Starting again on 20m, he was again auto-spotted and his first QSO in this run came at 1416 UTC with KB1M in New Hampshire. This was followed at 1445 UTC by a QSO with WV0Q in Colorado, and at 1446 UTC by a QSO with IK4IDF in Italy.

In all, Eric made thirty-two QSOs. All of Eric's QSOs were CW and were made at five watts output.

A highlight of the day was the sighting, after the rain and sleet had mostly stopped, of a beaver. 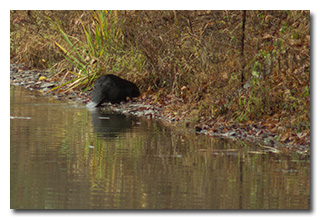 Jeff Slattery, N8SUZ, served as net-control for the Bobcat Trail Marathon and Half-Marathon. His station was located at the Burr Oak State Park Nature Center and he operated inside his warm van.

Since the marathon radio-net was being run on 2m FM simplex, Jeff was able to include each of the stations participating in the 2m net, all of which he was able to directly communicate with, in his POTA log.

In addition, since Jeff had good cell signal at the Nature Center, he was able to use POTA Spots to identify park-to-park (P2P) QSO opportunities and, during the long lulls in the radio net in the late afternoon after most of the aid stations had closed, he succeeded in making ten P2P QSOs on HF using SSB.