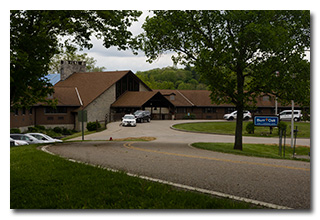 On Wednesday, May 5, 2021, one member of the Southeast Ohio Radio Adventure Team performed a successful impromptu activation of Burr Oak State Park in Ohio as part of the Parks on the Air (POTA; link) program. Eric performed the activation in the parking lot of the Lake Hope Lodge and Conference Center. Eric was accompanied by the small dogs Theo and Mindy.

Eric hadn't planned to perform this activation of Burr Oak State Park but following an easy two-fer activation of Wayne National Forest (K-4521) and North Country National Scenic Trail (K-4239) at the nearby Tom Jenkins Dam (link), Eric decided he would visit Burr Oak for his twenty-second activation of the park.

Eric arrived at the Lodge at about 1820 UTC, parked in a remote area of the parking lot, and quickly deployed his 28½' wire antenna on his 31' Jackite telescoping fiberglass mast and drive-on base. Because of the threat of rain, he set up his KX3 inside the car. Eric was on the air at 1840 UTC. 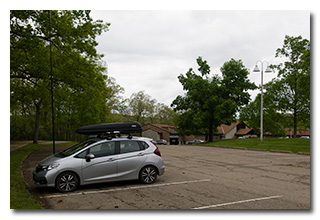 Unlike during his other visits to this location, the area was busy with a veritable army of lawn-mowers and other machines. Eric was concerned that these would generate copious amounts of RF noise but this didn't turn out to be a problem.

Eric began operations by looking on POTA Spots for possible P2P QSOs but none were found at this time.

Finding himself a frequency on 40m, Eric spotted himself on POTA Spots and began calling "CQ POTA". QSOs came slowly but steadily and in seventeen minutes Eric had completed six QSOs.

Returning to 40m to run his own frequency, Eric made an additional four QSOs in eight minutes.

In all, Eric made thirteen QSOs with three P2P QSOs. All of Eric's QSOs were CW and were made at the 5-watt level.

In working through his logs, Eric noticed that the signals sent and received were lower than those at the two-fer activation of Wayne National Forest (K-4521) and North Country National Scenic Trail (K-4269) (link) just an hour prior, so band conditions must have soured during the short time Eric was driving from Tom Jenkins Dam on one end of Burr Oak Lake to the Lodge.