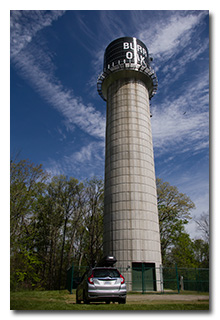 On Sunday, May 2, 2021, one member of the Southeast Ohio Radio Adventure Team performed a successful impromptu activation of Burr Oak State Park in Ohio as part of the Parks on the Air (POTA; link) program. Eric performed the activation under the park's water tower.

Eric hadn't planned to perform an activation of Burr Oak State Park but following an easy two-fer activation of Wayne National Forest (K-4521) and North Country National Scenic Trail (K-4239) at the nearby Tom Jenkins Dam (link) and the suggestion by his good friend K8RAT that he should consider activating Burr Oak, Eric decided he would visit Burr Oak for his twenty-first activation of the park.

Eric arrived at the water tower at about 1425 UTC and quickly deployed his 28½' wire antenna on his 31' Jackite telescoping fiberglass mast and drive-on base and, because he had forgotten to pack his folding camp-chairs, set up his KX3 inside the car. Eric was on the air at 1435 UTC.

Eric began operations by looking on POTA Spots for possible P2P QSOs and almost immediately made a P2P QSO on 20m with K4NYM who was activating Tenoroc Wildlife Area (K-6327) in Florida.

In all, Eric made sixteen QSOs, including one P2P QSO. All of Eric's QSOs were CW and were made at the 5-watt level.