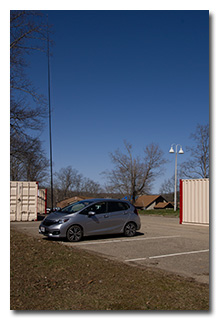 On Sunday, March 21, 2021, one member of the Southeast Ohio Radio Adventure Team performed a successful activation of Burr Oak State Park Ohio as part of the Parks on the Air (POTA; link) program.

Eric arrived at the Burr Oak Lodge and Conference Center at about 1450 UTC and found an out-of-the-way parking spot amid numerous construction-company cargo-containers. (The Lodge appears to be undergoing some renovations but no workmen were about on Sunday.) Eric quickly deployed his 28½' wire antenna on the 31' Jackite telescoping fiberglass mast and drive-on base. Because the outside temperature was still a bit cool, Eric chose to operate inside the car and he installed his KX3 on the car's dashboard. Eric was on the air at 1508 UTC.

With good cell-signal at this location in the park, Eric was able to use the POTA Spots website to look for possible park-to-park (P2P) QSOs and to self-spot himself.

Eric began operations by looking on POTA Spots for possible P2P QSOs but at this point in time found no other activations he could work.

Finding a clear frequency on 40m, Eric spotted himself to POTA Spots and began calling "CQ POTA". QSOs came more quickly than Eric had anticipated given the elevated solar A-index and K-index and in just about twenty minutes Eric had completed fifteen QSOs.

After the run on 40m, Eric again checked for P2P QSO possibilities and at 1535 UTC made a P2P QSO on 40m with N2G, a World Wide Flora and Fauna (WWFF) "Get Your Park ON! Spring Fling" special event station that was activating Rockaway River Wildlife Management Area (KFF-5318 / K-8049) in New Jersey. Looking for additional P2P QSOs, Eric found he could weakly hear on 20m two other "Get Your Park On!" stations, N6N and N6G, who were activating parks in California but the poor propagation conditions prevented him from working either of these stations.

In all, Eric made sixteen QSOs. All of Eric's QSOs were CW and were made at the 5-watt level.