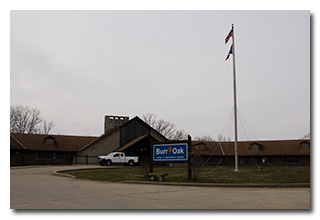 On Sunday, March 14, 2021, two members of the Southeast Ohio Radio Adventure Team performed a successful activation of Burr Oak State Park Ohio as part of the Parks on the Air (POTA; link) program.

Eric McFadden, WD8RIF, and Miles McFadden, KD8KNC, performed the activation of Burr Oak State Park on an overcast but otherwise pleasant late winter day at the Burr Oak Lodge and Conference Center parking lot. Eric and Miles were accompanied by Vickie McFadden, KC8MAJ, and little dogs Mindy and Theo. This activation was a quick activation following a family visit to the Millfield Mine Disaster (info) monument. 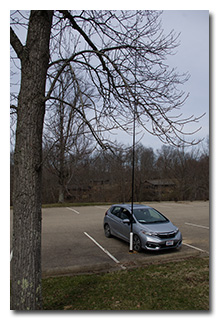 The quintet arrived at the Burr Oak Lodge and Conference Center at about 1840 UTC and Eric found a parking space well away from the few cars in the lot. He and Miles quickly deployed his 28½' wire antenna on his 31' Jackite telescoping fiberglass mast and drive-on base. Because it looked like it might rain, Eric chose to operate inside the car and he installed his KX3 on the car's dashboard. Eric was on the air at 1850 UTC. For this activation, Eric to use Miles' Altec-Lansing IMW-449 powered stereo speakers instead the usual headphones.

With the expected good cell-signal at this location in the park, Eric was able to use the POTA Spots website to look for possible park-to-park (P2P) QSOs and to self-spot himself. Eric did have some slight concern that the elevated solar A- and K-indices would lead to a challenging activation but these concerns proved to be unfounded.

Eric began operations by looking on POTA Spots for possible P2P QSOs but found none.

Finding a clear frequency on 40m, Eric spotted himself to POTA Spots and began calling "CQ POTA" and his first response was received at 1853 UTC. QSOs came very steadily and, despite the elevated indices, by the time he had called it quits at 1917 UTC, Eric had made twenty-two QSOs.

In all, Eric made twenty-two QSOs. All of Eric's QSOs were CW and were made at the 5-watt level.

Miles did not operate but did all the activation photography, helped with set-up and tear-down, and help care for the dogs. 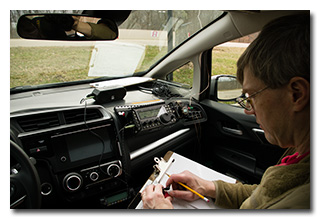