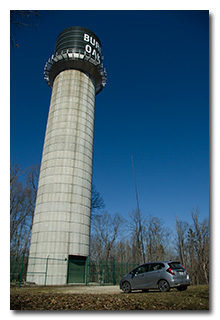 On Sunday, March 7, 2021, one member of the Southeast Ohio Radio Adventure Team performed a successful activation of Burr Oak State Park Ohio as part of the Parks on the Air (POTA; link) program.

Eric and Theo arrived at the Burr Oak water tower at about 1725 UTC and Eric quickly deployed his 28½' wire antenna on his 31' Jackite telescoping fiberglass mast and drive-on base. Choosing to operate inside the car, Eric installed his KX3 on the car's dashboard and was on the air at 1738 UTC.

With the expected good cell-signal at this location in Burr Oak State Park, Eric was able to use the POTA Spots website to look for possible park-to-park (P2P) QSOs and to self-spot himself.

Eric began operations by looking for P2P QSOs but found none at that particular moment. Finding a clear frequency on 40m, Eric spotted himself to POTA Spots and began calling "CQ POTA" and was almost immediately rewarded with a response. QSOs came very quickly, with Eric putting twenty-two QSOs in the log in about thirty-five minutes. This run included P2P QSOs with KN4RBN who was activating Guilford Courthouse National Military Park (K-0718) in North Carolina, with K0BWR who was activating Perry State Park (K-2347) in Kansas, and with KB3WAV who was activating Avondale Wildlife Management Area (K-7724) in Maryland.

In all, Eric made twenty-six QSOs, including five P2P QSOs. All of Eric's QSOs were on 40m, were CW, and were made at the 5-watt level.