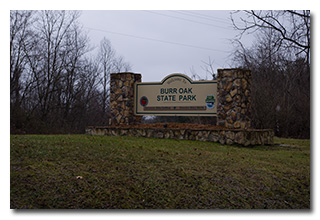 On Sunday, January 17, 2021, one member of the Southeast Ohio Radio Adventure Team performed a successful activation of Burr Oak State Park Ohio as part of the Parks on the Air (POTA; link) program.

Eric McFadden, WD8RIF, performed the activation of Burr Oak State Park at Dock 4 on on a cold, dreary day with spitting rain and snow. Eric was accompanied by little dogs Theo and Mindy.

Eric, Theo, and Mindy arrived at the essentially unoccupied Dock 4 at about 1900 UTC. After verifying he had cell-signal, Eric chose a place to park and deployed his 28½' wire antenna on his 31' Jackite telescoping fiberglass mast and drive-on base. Because of the weather, Eric chose to set up his station in his car, deploying his KX3 on the mobile-mount on the car's dashboard. Eric was on the air at 1919 UTC. 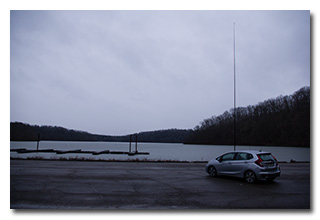 Eric began operations by looking at POTA Spots for possible P2P QSOs and at 1919 UTC a P2P QSO was made on 40m with VE2VIA who was activating Parc de la Riviere-du-Moulin Regional Park (VE-0973) in Quebec.

Switching to 80m, Eric found his own frequency and his first QSO there came at 1927 UTC with his father, W8OEG, in central Ohio. A second QSO on 80m came at 1933 UTC with Eric's friend K8RAT in Ohio.

It was about this time that Eric realized that the interference he was hearing in his KX3, interference that sounded for all the world like the "Russian Woodpecker" from the late 1970s and early 1980s, was actually being generated by his smartphone. After being unable to find a place to put his phone to eliminate the noise, Eric decided to turn the phone off.

Switching to 40m, Eric's first QSO there came at 1938 UTC with K4CAE in South Carolina. QSOs came steadily, with Eric's fourteenth QSO on 40m coming at 1954 UTC with KC2BPP in New York. This run included a P2P QSO at 1948 UTC with KN4RBN who was activating Haw River at Summit Center State Park (K-2736) in North Carolina.

Turning back on his smartphone in order to look for additional P2P QSOs, Eric was frustrated that his phone would now not connect to the internet. Apparently, his cell signal at this location was weak enough no 3G or 4G connection could be established after a shut-down.

In all, Eric made seventeen QSOs, including two P2P QSOs. All of Eric's QSOs were CW and were made at the 5-watt level.