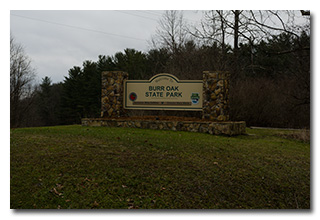 On Saturday, January 2, 2021, one member of the Southeast Ohio Radio Adventure Team performed a successful activation of Burr Oak State Park Ohio as part of the Parks on the Air (POTA; link) program.

Eric McFadden, WD8RIF, performed the activation of Burr Oak State Park on an unseasonably warm January day underneath at the muddy picnic area under the park's water tower. Eric was accompanied by his small dog, Theo.

Eric and Theo arrived at the water tower at about 1830 UTC. Finding the parking area to be rather muddy, Eric parked his car on the least muddy part he could find and Eric deployed his 28½' wire antenna on his 31' Jackite telescoping fiberglass mast and drive-on base. Despite the day being unseasonably warm, it was still cool enough for Eric to chose to set up his station in his car, deploying his KX3 on the mobile-mount on the car's dashboard. Eric was on the air at 1840 UTC. 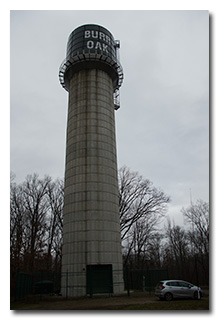 As at previous visits to this location, Eric found he had excellent cell-signal and was able to self-spot himself on the POTA Spots website and to look for park-to-park (P2P) QSO opportunities.

Eric began operations by looking at POTA Spots for possible P2P QSOs and at 1842 UTC a P2P QSO was made on 40m with KN4RBN who was activating Haw River at Iron Ore Access Belt State Park (K-3843) in North Carolina.

Switching to 80m, Eric found his own frequency and his first QSO there came at 1850 UTC with N3XLS in Pennsylvania. A second QSO on 80m came at 1853 UTC with VE3LDT in Ontario. Unfortunately, QRM prevented a P2P QSO on second band with KN4RBN from being completed.

Switching to 40m, Eric's first QSO on his own frequency came at 1900 UTC with K3KYR in New York. QSOs came steadily, with Eric's twelfth QSO in this run coming at 1911 UTC with N3XLS in Pennsylvania.

After checking POTA Spots again for P2P opportunities, a P2P QSO was made at 1916 UTC on 40m with KN3A who was activating Samuel S Lewis State Park in Pennsylvania.

Finding his own frequency on 30m, Eric's first QSO there came at 1923 UTC with K0YJT in Kansas. Eric's third QSO on 30m came at 1925 UTC with KE6GG who was using a remote station located in Maine.

In all, Eric made twenty-four QSOs, including two P2P QSOs. All of Eric's QSOs were CW and were made at the 5-watt level.