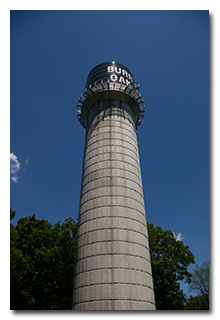 On Friday, June 12, 2020, one member of the Southeast Ohio Radio Adventure Team performed a successful activation of Burr Oak State Park in Ohio as part of the Parks on the Air (POTA; link) program.

On a day perfect for field radio, Eric McFadden, WD8RIF, performed the activation under the Burr Oak State Parks water tower while maintaining proper social distancing during the coronavirus (COVID-19) crisis while enroute to visit his parents in central Ohio, his first visit with them since the before onset of the the coronavirus crisis. Eric was accompanied by his wife Vickie and their two small dogs, Theo and Mindy.

Eric, Vickie, and the dogs arrived at water tower at about 1530 UTC and, after exploring the area a bit with the dogs, Eric decided to set up his station in a shady spot near a concrete post. Eric deployed his 28½' wire vertical on his MFJ-1910 33' telescoping fiberglass mast which he bungied to the concrete post. Eric set up his KX3 on his folding camp-chair. Eric was on the air at 1548 UTC.

Eric began operations on 20m, trying to make a Park-to-Park (P2P) QSO with W5LA who was performing an activation of Poverty Point Reservoir State Park, K-2373, in New York. Unfortunately, another strong station was also running on the same frequency and, after wasting too many minutes trying unsuccessfully to work W5LA, Eric gave up and switched to 80m at 1554 UTC.

On 80m, Eric spent several minutes calling "CQ POTA" with no takers. When Eric confirmed via text that his friend K8RAT couldn't hear him on 80m, Eric switched to 40m. 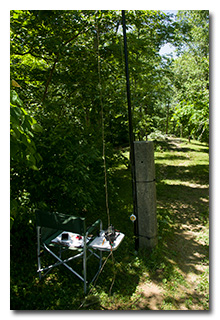 Eric managed only one QSO on 30m, at 1620 UTC, with K0NXV in Minnesota. After several unproductive minutes calling "CQ" with no takers, Eric switched to 20m at 1625 UTC.

Wanting to hit the road for the hour-long drive to his parents' house, Eric finished up his operation at 1640 UTC.

In all, Eric made nineteen QSOs. All of Eric's QSOs were CW and were made at the 5-watt level.