Come to the North Country. Trek the hills and valleys. Stand on the shores of lakes & streams from glaciers 10,000 years before. Clear-flowing water, red/gold of autumn, a fairyland of snow, open prairies, and distant horizons paint the land. Historic sites along the way tell how America settled and grew as a nation. From North Dakota to Vermont, adventure is never far away. 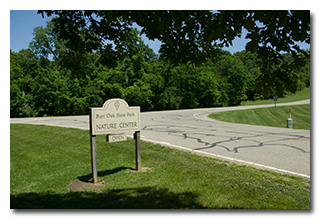 On Friday, June 4, 2021, one member of the Southeast Ohio Radio Adventure Team performed successful simultaneous activations of Burr Oak State Park and North Country National Scenic Trail in Ohio as part of the Parks on the Air (POTA; link) program. 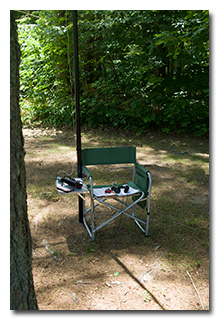 Already knowing that the NCNST, which is coincident with the Buckeye Trail (BT) in southeastern Ohio, runs all the way around Burr Oak Lake within Burr Oak Lake State Park, Eric had studied the NCNST interactive map to determine where within Burr Oak State Park the NCNST might be high enough in elevation to afford him even marginal cell-signal. (He already knew from years of supporting the Bobcat Trail Marathon at Dock #3 that essentially no locations at lake-level within the park have cell-signal.) The NCNST interactive map had seemed to indicate that the NCNST passes along the ridgetop at the Burr Oak State Park main entrance on SR-78, so Eric decided to perform his activation at the parking area there if he could find evidence that the NCNST does, indeed, pass through that location. Arriving at the state park main entrance about 1715 UTC, Eric found no evidence of a trailhead whatsoever at that location. Knowing that the NCNST/BT passes along the road in front of the state park's nature center, Eric drove the short distance down into the park to the nature center and pleased to see that he still had a few bars of cell-signal at that point. Finding a tree-shaded picnic area adjacent to the nature center, Eric deployed his 28½' wire vertical on his 31' Jackite telescoping fiberglass mast strapped to his folding camp-chair, and placed his Elecraft KX3 on the camp-chair's fold-up table. Eric was on the air at 1738 UTC.

Eric began operations on 40m and as he tuned around to try to find a frequency to run, he found KU8T activating Mt Etna on Salamonie Lake State Recreation Area (K-4179) in Indiana, and Eric completed a park-to-park (P2P) QSO with Tom at 1738 UTC.

Finding his own frequency to run on 40m, Eric made two QSOs during the next ten minutes. The first came at 1743 UTC with his good friend K8RAT in central Ohio. The second came at 1748 UTC with tireless POTA Hunter K9IS in Wisconsin. Why were QSOs on 40m so slow in coming? Eric didn't know that answer to this question then, and he still doesn't know the answer.

Returning to try his luck again at running a frequency on 40m, Eric fared much better. At 1754 UTC he complete a QSO with W8EWH in Michigan. Now QSOs came steadily, with Eric's fourteenth QSO in this run coming at 1810 UTC with WA4RCW in Tennessee. This run included a P2P QSO with N8PEM who was activating Madison Lake State Park (K-1973) in Ohio, a P2P QSO with WT4U who was activating Cumberland Gap National Historical Park (K-0019) in Kentucky, and QSOs with operators located in Michigan, Tennessee (2), Indiana, Ohio, New Jersey, Kentucky (3), Illinois, South Carolina, North Carolina, Florida, and Wisconsin.

Switching to run a frequency on 20m, Eric's first QSO there came at 1819 UTC with NA5AR in Texas. This was followed at 1820 UTC by a QSO with N0VRP in Texas and at 1821 UTC by a QSO with WI1G in New Hampshire. Eric slightly changed frequency to escape from some QRM and at 1826 UTC he completed a QSO with KB6QEW in Maine.

Finally, pausing to check POTA Spots one more time for P2P QSO opportunities, at 1829 UTC Eric made a P2P QSO on 20m with WC1N who was performing a POTA/SOTA activation in White Mountain National Forest (K-4512) in Maine or New Hampshire.

In all, Eric made twenty-three QSOs with five P2P QSOs. All of Eric's QSOs were CW and were made at the 5-watt level.

Eric also submitted his log to the World Wide Flora and Fauna in Amateur Radio (WWFF; link) program for KFF-1939.