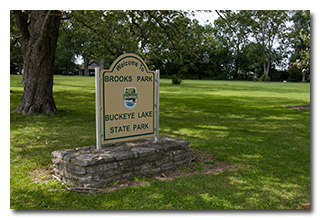 On Labor Day Monday, September 7, 2020, one member of the Southeast Ohio Radio Adventure Team performed a successful activation of Buckeye Lake State Park in Ohio as part of the Parks on the Air (POTA; link) program.

On a blustery later Summer day, while enroute to a Labor Day family gathering, Eric McFadden, WD8RIF, performed the activation of Buckeye Lake State Park at Brooks Park on the south-western shore of Buckeye Lake. Eric was accompanied by his daughter Kate; Kate's dog, Bo; and Eric's dog, Theo.

Eric, Kate, and the dogs arrived at the Brooks Park in Buckeye Lake State Park at about 1630 UTC to find the park lightly populated with anglers along the shoreline and with lots of space for a socially-distanced activation. While Kate and Bo explored the area, Eric deployed his station. For this activation, Eric used his new K1 Travel Kit as test to verify that the kit was complete and worked well before using it for a first bicycle-portable outing. (This was Eric's first POTA activation which didn't involve Eric's Elecraft KX3.) Eric deployed his 28½' wire antenna as an inverted-vee with the center supported at about 18' on a Goture Red Fox 7.2m carbon-fiber telescoping fishing pole that was supported on a PVC-and-spike base. Eric set up his K1 on his folding camp-chair and was on the air at 1646 UTC. (Eric will not, of course, not have the full-size folding camp-chair with him when he uses the K1 Travel Kit for bicycle-portable outings.) 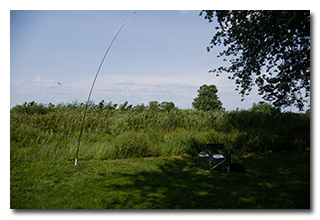 Having good cell-signal at the site, Eric self-spotted himself to POTA Spots (link) and began operations on 40m.

Eric's first QSO came at 1649 UTC with W5GDW in North Carolina. After this QSO, Eric realized he hadn't yet told his K1's internal ATU to match the antenna! Commanding the KAT1 to attempt a match, Eric was disappointed to find that the KAT1 had trouble finding a match. After he switched out the Elecraft 4:1 balun for a simple BNC-to-dual-banana-socket adapter, the KAT1 easily found a good match on 40m. Thereafter, QSOs came steadily if not quickly, with Eric's tenth QSO coming at 1719 UTC with KD1JT in Connecticut. This run of QSOs included a park-to-park (P2P) QSO with N1RBD who was performing an activation of Fort Yargo State Park (K-2177) in Georgia. 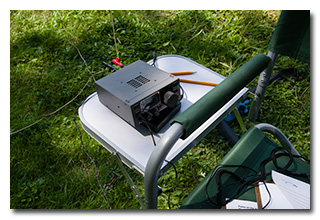 With the time of family get-together approaching, Eric chose not to spend time on 20 or 30m making additional QSOs.

In all, Eric made thirteen QSOs, which included four P2P QSOs. All of Eric's QSOs were CW and were made at the 5-watt level.

During this activation, Eric found QSOs somewhat harder to make than had been the case at other recent activations. Whether this difficulty was due to HF propagation conditions, the use of the K1 instead of the KX3, the compromise deployment of the antenna, or perhaps a combination of multiple things, is unclear. At no point during the operation, however, did Eric fear that he would fail to easily make the ten QSOs required for a valid activation. 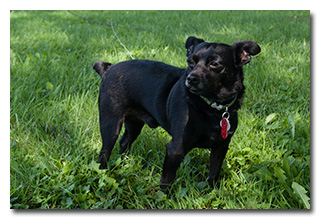 For the most part, the K1 Travel Kit performed well. No important items had been forgotten or overlooked. The Elecraft K1 transceiver performed well, although, since Eric hadn't used his K1 very much prior to this activation, a learning curve was involved. For instance, Eric quickly learned that the K1's VFO is touchy and it's very easy to bump the knob and suddenly be a couple of kilohertz off frequency. The Gotura Red Fox 7.2m carbon-fiber telescoping fishing pole easily supported the wire antenna as an inverted vee and the pole was well supported by the PVC-and-spike base Eric had constructed for this purpose, even with the blustery conditions during the operation. (Eric has removed the top three elements from the fishing pole; they're far too whippy to be of any use in this application.) The battery purchased specifically for the K1 Travel Kit, the small and lightweight Talentcell 12v 3000mAh LiPO battery, worked beautifully. At the end of the roughly 45-minute operation which involved a significant amount of transmitting at 5w, the battery's five-LED state-of-charge indicator was still showing all five LEDs and, back at home, the ½-Amp slow-charger that came with the battery very quickly recharged the battery, indicating that the battery hadn't been very deeply discharged at all. 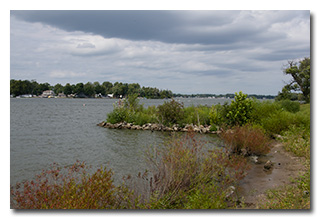 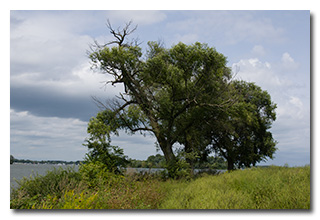 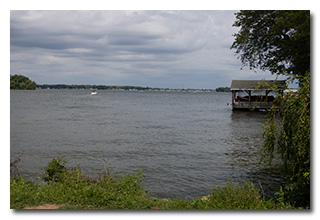 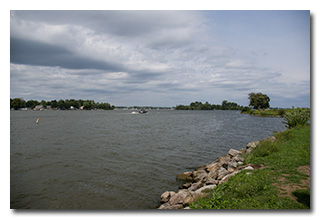