Buckeye Lake, constructed as a canal feeder lake in 1826, is Ohio's oldest state park. The park has long been a popular vacation spot and today offers endless water-related recreational opportunities including swimming, skiing, boating and fishing. 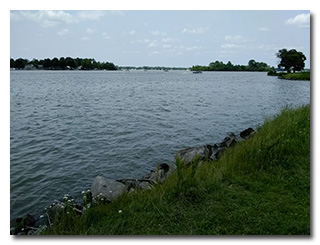 One member of the Southeast Ohio Radio Adventure Team succeeded in performing a valid activation of Buckeye State Park, K-1938, in Ohio as part of the Parks on the Air (POTA; link) program. Eric McFadden, WD8RIF, was accompanied by his wife Vickie, KC8MAJ, and thier small dogs Theo and Mindy, on a visit to Buckeye Lake State Park on a beautiful early June afternoon.

Eric, his wife, and the dogs arrived at the "Brooks Park" in Buckeye Lake State Park at 1709 UTC. After taking a few minutes to walk the dogs and to scout out the station possibilities, Eric chose a spot well shaded by tall trees and quickly erected his 28½' end-fed wire on his MFJ-1910 31' telescoping fiberglass mast and set up his KX3 station on his folding camp-chair. Eric was ready to be on the air by 1728 UTC.

Eric's first QSO was with his good friend and fellow SEORAT member, K8RAT, on 80m, at 1734. As expected, given the time of day, signal strengths at both ends of the path were poor despite the stations being only about 60 miles apart. However, a complete QSO was made and K8RAT, an inveterate POTA Hunter, got credit for working the Buckeye Lake State Park. 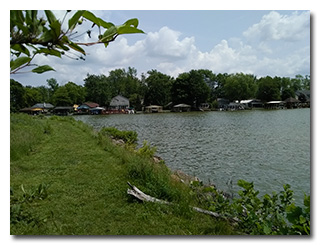 Not expecting additional QSOs on 80m during the middle of the day, Eric switched to 40m and called "CQ CQ CQ POTA de WD8RIF WD8RIF K1938 K" twice in hopes of the POTA Spots website seeing him and then switched to the shorter "CQ POTA de WD8RIF". (Eric was later able to confirm that the POTA Spots website did properly spot him at the correct park as a result of the two long calls.) After just a few calls of CQ, Eric made his first QSO on 40m at 1736 UTC with W8LVI. QSOs came steadily with Eric making his ninth QSO on 40m at 1755 UTC with AC4FZ.

Eric switched to 20m at 1757 UTC and, despite S-5 broadband-noise that required use of his KX3's noise-blanker, he began calling "CQ POTA". His first QSO on 20m came at 1800 UTC with W0EJ. QSOs on 20m came steadily until Eric made his fifth QSO on 20m at 1809 UTC with super-Hunter W9AV, whom Eric had earlier worked on 40m. (In the middle of the string of QSOs, the noise level dropped dramatically.)

Eric had been warned by K8RAT that propagation on HF was terrible, with signals that usually are strong being very weak. Eric was very pleased that QSOs were easy to make on 40, 20, and 30m—even with the high noise floor when he stated on 20m. Granted, Eric did send some remarkably low RSTs (such as 339) and he received some remarkably low RSTs (such as 339) but despite the low signal strengths, plenty of Hunters were heard and nearly all of them were worked.