Rugged hills and rich green forests provide the backdrop to Blue Rock State Park in southeast Ohio. Escape to nature's solitude, and enjoy the diverse flora and fauna of this scenic 322-acre state park. The park's picturesque shelters offer the perfect setting for wedding or other special occasions. 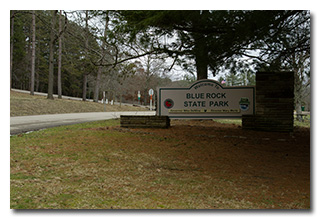 On Saturday, February 27, 2021, one member of the Southeast Ohio Radio Adventure Team performed a successful activation of Blue Rock State Park in Ohio as part of the Parks on the Air (POTA; link) program.

Eric McFadden, WD8RIF, arrived at the state park to find access to his preferred operating location, one of the two hill-top picnic areas, blocked by a closed gate. However, with Cutler Lake still frozen, the swimming-beach parking area was virtually empty, and Eric was able to find a location in the parking area well away from power lines and the few other cars to set up his station. Eric deployed his 28½' wire antenna on his 31' Jackite telescoping fiberglass mast and drive-on base. Eric chose to set up his KX3 inside the car and was on the air at 1900 UTC. 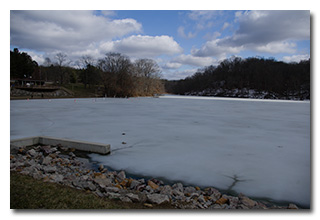 Eric was disappointed but not surprised to find very poor cell-signal. He had just enough signal to send and receive SMS text messages if he held his smartphone outside the car. He couldn't self-spot himself on the POTA Spots website or look for park-to-park (P2P) QSO possibilities but he could text his friends K8RAT and K4SWL to ask for spotting-support.

Beginning operations on 80m, Eric had QSOs with his friend K8RAT and his father W8EOG, both in Ohio.

Switching to 40m, Eric managed fourteen QSOs in twenty minutes. This run included the surprise of a second QSO with his father, W8EOG.

In all, Eric made eighteen QSOs. All of Eric's QSOs were CW and were made at the 5-watt level. 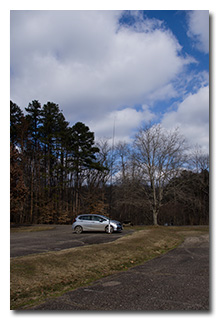