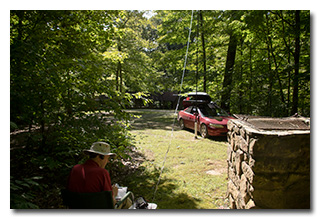 On Saturday, August 24, 2019, two members of the Southeast Ohio Radio Adventure Team performed a successful activation of Blue Rock State Park in Muskingum County, Ohio as part of the Parks on the Air (POTA; link) program while simultaneously participating as a rover in the Ohio QSO Party. For Eric McFadden, WD8RIF, and Miles McFadden, KD8KNC, Blue Rock State Park was the second activation of four following a visit to Newark-Heath Airport (VTA) to see and tour B-25J Champaign Gal and C-47D Hairless Joe.

After a successful activation at Blue Rock State Forest (link), Eric and Miles arrived at the Blue Rock State Park hilltop picnic shelter at about 2020 UTC. In the hope of better performance on 80m, Eric chose to deploy his half-size W3EDP as an inverted-vee with the highest point supported on his 31' Jackite fiberglass telescoping mast which was held upright by a drive-on base and he set up his KX3 on a folding camp-chair adjacent to the car. Eric was on the air by 2039 UTC.

In order to give his good friend and fellow SEORAT-member K8RAT, Mike, a QSO, Eric started operations on 80m but found that his KX3's internal ATU wouldn't provide a good match on 80m. For 80m, Eric reconfigured his antenna as an end-fed wire operated against his 28½' wire arrayed on the ground as a counterpoise. With this antenna, Eric succeeded in making a QSO with Mike at 2043 UTC. 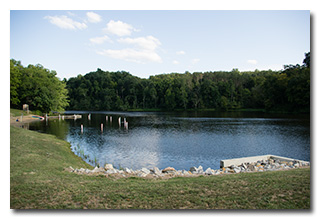 Switching to 40m in the hopes of working POTA Hunters, Eric reconfigured his antenna as a half-size W3EDP inverted-vee and was plesaed to find that the noise level on 40m was very low, much lower than it had been at the Blue Rock State Forest fire tower. Eric began making alternate calls of "CQ POTA" and "CQ OHQP. Eric's first QSO on 40m came at 2045 UTC with W3WHK and his eighth QSO on 40m came at 2101 UTC with VE3AQ.

Switching to 20m at 2104 UTC, Eric found that band to be far less productive than 40m had been, and his calls of CQ resulted in no QSOs. Turning around the band, Eric managed a QSO with N4BP at 2109 UTC and with N0R, who was participating in the Kansas QSO Party from Rawlins County, at 2111 UTC.

The only two callsigns Eric recognized as being those of POTA Hunters were K8RAT and N4EX. In all, Eric made eleven QSOs in thirty-two minutes.

Miles didn't operate but helped with set-up and tear-down, did much of the RATpedition photography, and helped with navigation.