Rugged hills and rich green forests provide the backdrop to Blue Rock State Park in southeast Ohio. Escape to nature's solitude, and enjoy the diverse flora and fauna of this scenic 322-acre state park. The park's picturesque shelters offer the perfect setting for wedding or other special occasions.

Decades of careful forest management and protection practices have transformed formerly low-quality farmland into one of Ohio's most beautiful and productive forests. The 4,578-acre Blue Rock State Forest, located in Muskingum County, features a fire tower and 26 miles of bridle trails. 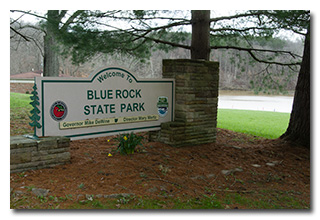 On Friday, April 8, 2022, one member of the Southeast Ohio Radio Adventure Team performed successful simultaneous activations of Blue Rocks State Park and Blue Rocks State Forest in Ohio as part of the Parks on the Air (POTA; link) program. 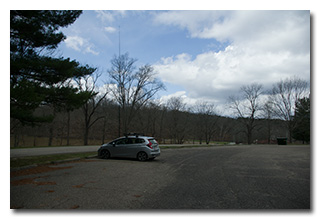 Finding the Blue Rock State Park swim-beach and camp-store parking area to be nearly empty, Eric parked his car, walked Theo, and then deployed his 28½' wire vertical on a Jackite 31' telescoping fiberglass mast and drive-on mount and, because of the threat of rain, he set up his KX3 inside the car. Eric was on the air at 1543 UTC.

At his previous visit to this location in Blue Rock State Park, Eric had found he had poor cell-signal, so he was surprised this time to find he had good enough cell-signal to allow him to spot himself on POTA Spots (link) and to use POTA Spots to identify possible park-to-park (P2P) QSO opportunities. Because he hadn't expected to have cell-signal, Eric had previously announced his activation on POTA Spots and had arranged for his friends K8RAT and K4SWL to watch for him on the Reverse Beacon Network (RBN, link). 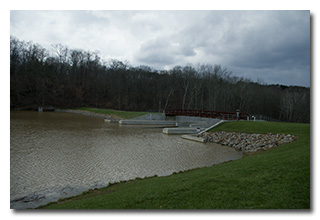 Eric finished his activation by checking POTA Spots for P2P QSO opportunities and at 1616 UTC, he made a P2P QSO on 40m with W2NR who was activating Wapack National Wildlife Refuge (K-0451) in New Hampshire.

Thinking he was finished, Eric updated his spot to show "QRT" and ate his picnic lunch. Just as he was finishing his sandwich, but before he had finished his grapes, he saw that K4SWL, who was still activating Fort Dobbs State Historic Site (K-6839) in North Carolina, had switched to 30m. Since Eric hadn't yet taken down his station, he tuned to 30m and succeeded in making a second P2P QSO with K4SWL.

In all, Eric made twenty-four QSOs, including three P2P QSOs, in about fifty minutes. All of Eric's QSOs were CW and were made with five watts output.