Located in eastern Ohio, Barkcamp State Park's picturesque hills and lake is the perfect place to try an array of outdoor activities. The 1,005-acre park offers visitors the chance to camp surrounded by mature woodlands and rolling hills or spend the day exploring the rugged Appalachian region. 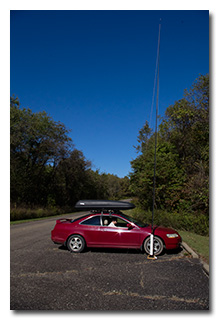 On Saturday, October 12, 2019, two members of the Southeast Ohio Radio Adventure Team performed a successful activation of Barkcamp State Park in Ohio as part of the Parks on the Air (POTA; link) program while also participating in the ARP ARCI's Fall QSO Party. Eric McFadden, WD8RIF, and Miles McFadden, KD8KNC, performed that activation of Barkcamp State Park following their visit to the Parkersburg / Wood County Hamfest and a successful activation of Sunfish Creek State Forest (link). This was the second of three activations planned for the day.

Eric and Miles arrived at Barkcamp State Park under clear skies at about 1800 UTC and checked out the "Overlook Picnic Area" before choosing to set up at the "Turnaround Picnic Area". Because the temperature remined low, Eric chose to operate in the car and he and Miles deployed the 28½' wire vertical on the 31' Jackite telescoping fiberglass mast supported on the drive-on mount, the KX3 was hung on the car's glove-box door, and Eric was on the air at 1823 UTC.

Wanting to give his good friend and fellow SEORAT-member K8RAT, Mike, a QSO, Eric started operations on 80m and a QSO with Mike was made almost immediately at 1825 UTC. Eric's second QSO on 80m was with his father, W8EOG, at 1829 UTC. Subsequent CQ calls went unanswered and Eric changed to 40m at 1839 UTC. 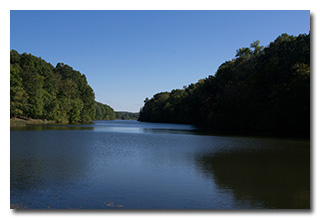 Eric was pleased to have made a Park-to-Park (P2P) QSO with W8MSC who was activating Copper Country State Forest in Michigan. However, Eric was disappointed that, just at the previous activation of the day, despite operating near the international QRP calling frequencies and despite sending the call "CQ QRP" as suggested for participants of the QRP ARCI Fall QSO Party, none of the stations he worked were participating in the Fall QSO Party. All of Eric's QSOs were CW and were made at the 5-watt level.